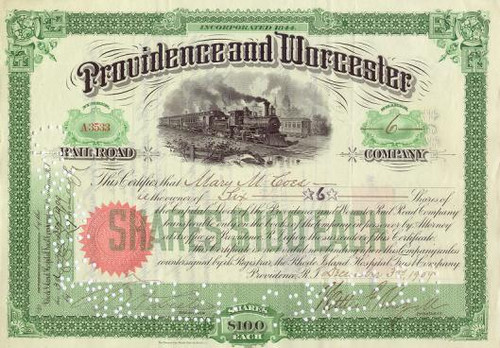 Beautifully engraved Certificate from the famous Providence and Worcester Railroad issued from 1900 - 1909. This historic document was printed by the Homer Lee Banknote Company and has an ornate border around it with a vignette of an old train. This item is hand signed by the Company's President, Walter F. Angell and its Treasurer, William A. Leete. This item is over 90 years old. The company was incorporated under the Laws of Massachusettes and Rhode Island in 1844. There is a total of 50.60 miles of track. In 1892 the the company was leased to the New York, New Haven and Hartford RR for 99 years. Today the Providence and Worcester Railroad Company (P&W) is a regional freight railroad operating in Connecticut, Massachusetts, New York, and Rhode Island. Its 28 diesel electric locomotives run over 545 miles of track (170 miles of which it owns). An interstate freight carrier, it serves about 150 customers, hauling such goods as construction materials, foodstuffs, plastics, chemicals, and metals. It interchanges freight traffic with Consolidated Rail, Springfield Terminal Railway, New England Central Railroad, and the New York and Atlantic Railroad. P&W operates locomotive and railcar maintenance facilities in Worcester, Massachusetts, and Plainfield, Connecticut.