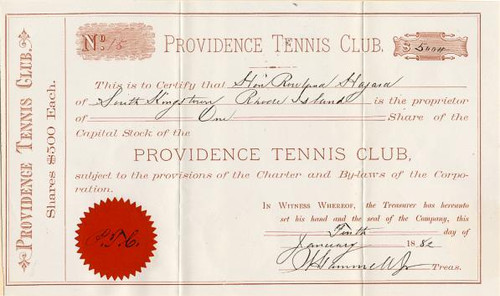 Beautiful certificate from the Providence Tennis Club issued in 1882. This historic document has an ornate border around it with a Red Seal. This item has the signature of the Company's Treasurer, William Gammell, Jr., and is over 125 years old. As Reported in the King's Pocket-book of Providence, R.I. Moses King, Cambridge, Mass., 1882. Tibbitts, Shaw & Co., Providence, RI : CASINO, THE, Brook St., cor. Manning St., is a frame building with an iron-covered hip roof, just completed for the Providence Tennis Club, a society which embraces a number of wealthy citizens. It comprises a main building and three wings. The building proper is about 45 ft. high, with a concreted floor 95 ft. sq., divided into two 'tennis-courts'. One wing contains a bowling alley, the second is an archery-court, the other furnishes a spectators' gallery for the tennis-hall. AN ACT TO INCORPORATE THE " PROVIDENCE TENNIS CLUB." in 1882 It is enacted by the General Assembly as follows: SECTION 1. Rowland Hazard, James Coats, William Gammell, Jr., Francis W. Carpenter, Thomas P. I. God- dard, William Grosvenor, Jr., Royal C. Taft, Johns H. Congdon and Walter Hidden, and all persons who are or may hereafter become associated with them, are hereby created a body corporate and politic by the name of the " Providence Tennis Chili," for the purpose of founding a club, and for the using, promoting and enjoying of games and sport of every kind and description, not repugnant to the laws of this state, and for the development and improvement of literary and social intercourse, and physical and mental cultivation of its members, with all the powers and privileges, and subject to all the duties and liabilities set forth in chapter 152 of the Public Statutes, and all acts in amendment thereof and in addition thereto. SEC. 2. The said corporation shall have power to make and ordain such constitution and by-laws, not repugnant to the constitution and laws of this state and of the United States as it may think proper, and the same to modify and repeal at pleasure; to take, hold and convey real and personal property to an amount not exceeding fifteen thousand dollars, and which real and personal property may be divided into such a number of shares and of such amount as may be determined by the said corporation, and which shares shall be deemed personal property, and transferred as such according to snch rules and conditions as the said constitution and by-laws may prescribe. SEC. 3. The above named Rowland Hazard, Jame? Coats, William Gammell, Jr., Francis W. Carpenter. Thomas P. I. Goddard, Royal C. Taft, Johns H. Cong- don and Walter Hidden, or any three of them, are hereby authorized to call the first meeting of the said corporation. SEC. 4. This act shall take effect from and after its passage.