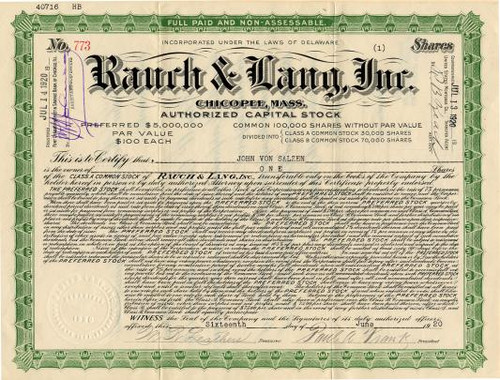 Beautiful certificate from the Rauch & Lang, Inc issued in 1920. This historic document has an ornate border around it. This item has the signatures of the Company's President and Treasurer and is over 87 years old. The Rauch and Lang Carriage Company was located in Cleveland, Ohio and began their business by creating carriages and coaches. The Rauch and Lang automobiles were electrically powered and often adorned with luxurious amenities. The electric motor provided benefits over the gas-powered engine. Starting the automobile was easy, especially when compared with the runimentary means of spinning a crank to start an electric motor. The electric motor was quiet and did not produce fumes. The draw-back was that it could only travel a short distance before requiring a recharge. From 1905 through 1916 they produced automobiles. The automobiles they produced, both open and closed versions, were expensive and purchased mostly by rich urban women. In 1916 they merged with Baker Electric and became known as Baker, Rauch & Lang Company. In 1920, the passenger car part of the business was sold to the Stevens -Duryea organization and moved to Chicopee Falls, Massachusetts. In 1922, Rauch & Lang Inc. started producing electric powered taxi cabs.