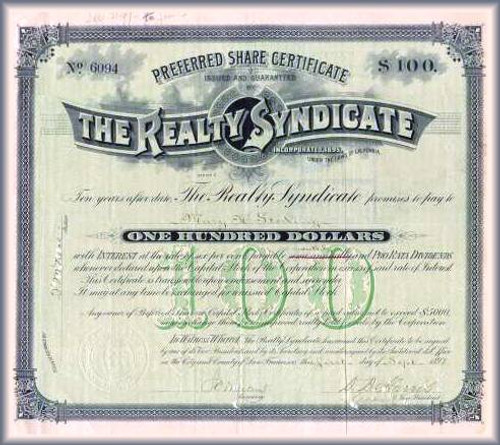 Beautifully engraved certificate from the Realty Syndicate issued in 1897. This historic document has an ornate border around it with a vignette of the company's name. This item is hand signed by the company's vice-president and secretary and is over 108 years old. The company owned a lot of real estate in the Oakland California area. They also had ownership in the San Francisco - Oakland Terminal Railway, California Improvement Company, Twelfth Street Railway, and the Iowa Park Compasny. Below is a newspaper reference about the company just after the Great San Francisco Earthquake. REFUGEES GO TO OAKLAND AFTER SAN FRANCISCO EARTHQUAKE OAKLAND, April 18, 1906 --Thousands of refugees, rendered homeless by the terrible calamity which has overtaken San Francisco, have come to this city to escape from the terrors across the bay. On learning of this the Realty Syndicate at once offered Idora Park for the use of those left without shelter by the earthquake. The offer has been gratefully accepted by the Police and Fire Commissioners, and two hundred cots have been placed in the theater for use of the refugees. Relief stations have also been established at the City Hall, and at the varous public parks throughout the city.