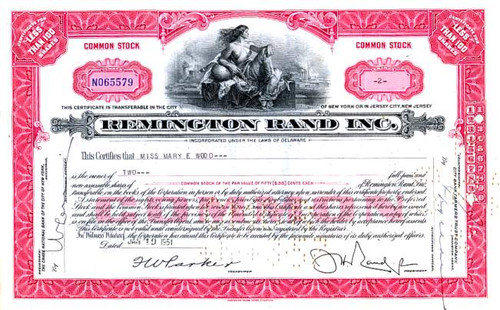 Beautifully engraved certificate from the Remington Rand Inc. issued no later than 1955. This historic document was printed by the American Banknote Company and has an ornate border around it with a vignette of a bare breasted woman leaning on a globe with manufacturing operations in the background. (Nudity on the older stocks certificates were supposed to be a sign of purity) This item has the printed signatures of the Company's President, James Rand Jr. and its Treasurer, F. W. Parker. The certificate is over 61 years old. 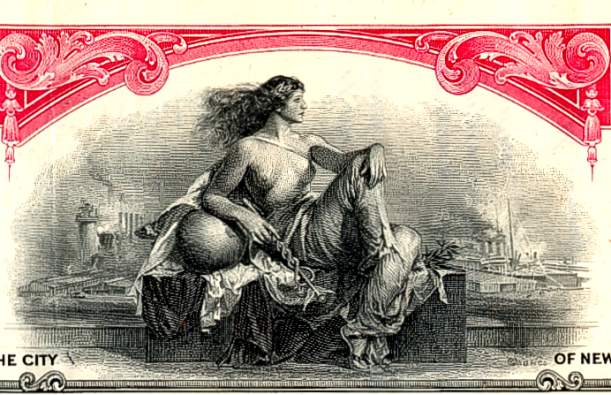 Certificate Vignette
The Remington Rand Corporation was formed in 1927 by the merger of the Remington Typewriter Company and the Rand Kardex Company. The Remington Typewriter Company's immediate predecessor was E. Remington and Sons of Ilion, New York which began manufacturing sewing machines in 1873. In 1876, E. Remington and Sons purchased patents for a typewriter invented by Christopher Latham Sholes. Improvements made to Sholes' typewriter design were based on sewing machine construction. The Remington typewriter Model 1 printed in only capital letters, sat on a table like a sewing machine, used a foot treadle for a carriage return and was painted black with floral decorations just like a sewing machine. Slow typewriter sales were boosted by its display at the Philadelphia Centennial Exposition, but it was the work of Wyckoff, Seamans & Benedict which would lead Remington to be the world's largest typewriter manufacturer. In 1882, this newly formed firm acquired world-wide sales rights of the Remington typewriter. It began an aggressive marketing campaign which included opening several international offices. In 1886, Wyckoff, Seamans & Benedict purchased the typewriter business from E. Remington and Sons. The name was changed to Remington Typewriter Company in 1905. In the same year that Wyckoff, Seamans & Benedict took over the sales of Remington typewriters, the New York YWCA began offering typing classes to young women. Many thought the classes were a mistake, but the program's first graduates were quickly hired at business offices. Business schools and typing classes sprung up all over the world and female "typewriters" (as the typewriter operators were then known) began to fill business offices, thus opening a new world of economic opportunities to women. The Rand Kardex Company, Remington Rand's other antecedent, was created from James H. Rand Sr.'s Rand Company and James H. Rand Jr.'s American Kardex Company. Both companies manufactured record-control and storage equipment. Before the 1927 merger with the Remington Typewriter Company, Rand Kardex acquired the Index-Visible Company, the Baker-Vawter Company, the Kalamazoo Loose-Leaf Binder Company and the Safe-Cabinet Company, making it one the country's most important manufacturers of record-control systems. The UNIVAC I (UNIVersal Automatic Computer I) was the first commercial computer made in the United States. It was designed by J. Presper Eckert and John Mauchly, the men behind the first American electronic computer, the ENIAC. During the years before successor models of the UNIVAC I appeared, the machine was simply known as "the UNIVAC". The first UNIVAC was delivered to the United States Census Bureau on March 31, 1951 and was dedicated on June 14th that year. The fifth (built for the Atomic Energy Commission) was used by CBS to predict the 1952 presidential election. With a sample of just 1% of the voting population it predicted that Eisenhower would win; something nobody would believe, but UNIVAC was right! The UNIVAC I computers were built by Remington Rand's UNIVAC-division (successor of the Eckert-Mauchly Computer Corporation (EMCC), bought by Rand in 1950). The Advertising and Sales Promotion Department of Remington Rand provided support to the extensive sales force in each of the Company's product divisions. The Department utilized print advertising, direct mail, contests and "salesmen helps" to sell Remington Rand products. By the 1940s, target marketing of specific industries became an important part of the department's approach. As well as being the first American commercial computer, the UNIVAC I was the first computer designed at the outset for business and administrative use (i.e. for the fast execution of large numbers of relatively simple arithmetic and data transport operations, as opposed to the complex numerical calculations required by scientific computers). As such the UNIVAC competed directly against punch-card machines (mainly made by IBM), but oddly enough the UNIVAC originally had no means of either reading or punching cards (which initially hindered sales to some companies with large quantities of data on cards, due to potential manual conversion costs). This was corrected by adding offline card processing equipment, the UNIVAC Card to Tape converter and the UNIVAC Tape to Card converter, to transfer data between cards and UNIVAC magnetic tapes. The first contracts were with government institutions such as the Census Bureau, the US Air Force, and the Army Map Service. Contracts were also signed by the ACNielsen Company, and the Prudential Insurance Company. Following the sale of Eckert-Mauchly Computer Corporation to Remington Rand, due to the cost overruns on the project, Remington Rand convinced Nielsen and Prudential to cancel their contracts. Following the first three UNIVAC I systems, two were sold to the Atomic Energy Commission, and one to the US Navy. The seventh UNIVAC I was installed at the Remington Rand sales office in New York City. The eighth UNIVAC I, the first sale for business applications, was installed at the General Electric Appliance Division, to do payroll, in January, 1954. DuPont bought the twelfth UNIVAC I, it was delivered in September, 1954. Pacific Mutual Insurance received a UNIVAC I system in August, 1955. Other insurance companies soon followed. As for government use, the Census Bureau got a second UNIVAC I in October 1954. In 1955, Remington Rand merged with the Sperry Company to form the Sperry Rand Corporation. While the Sperry Rand Corporation began to focus on the growing electronics and computer industry, it continued to manufacture office equipment like typewriters and a line of copiers under their Remington Division. In 1979, Sperry Rand sold off its office machines business and Victor Kiam bought the electric shaver company in a leveraged buyout. This left Sperry Corporation, as the company became, with the computer company and related operations. Burroughs Corp., another computer company, bought Sperry in 1986. The merged company became Unisys Corporation.