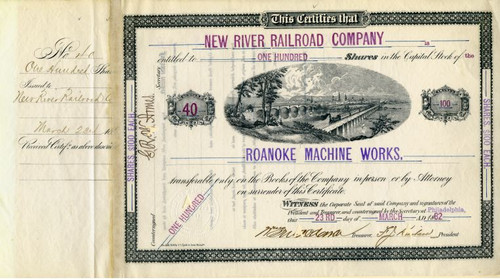 RARE stock certificate from the Roanoke Machine Works issued in 1882. This historic document was printed J.C. Clark and Sons Company, Philadelphia and has an ornate border around it with a vignette of a train approaches traveling across long bridge, another bridge beyond. The stock for 100 shares was issued to the New River Company. This item has the signatures of the Company's President and Secretary. This is the earliest variety of this company's certificate, we have seen. 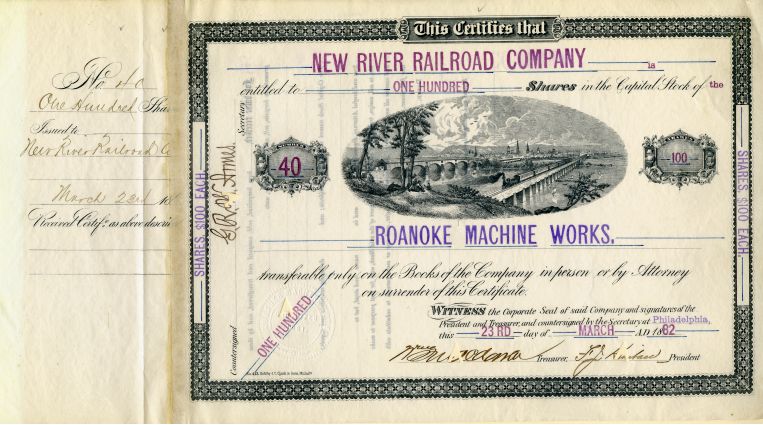 Certificate
The Roanoke Shops (also called the East End Shops) is a Norfolk Southern workshop and maintenance facility in Roanoke, Virginia. Between 1884 and 1953, the shops produced 447 steam locomotives, all for the Norfolk and Western (N&W). History Before 1881, Roanoke had been the sleepy farming community of Big Lick and a small stop on the Atlantic, Mississippi and Ohio Railroad (AM&O). That changed when the owners of the Shenandoah Valley Railroad, building up the valley, purchased the AM&O, renamed it the Norfolk and Western, and selected Big Lick as the new junction. The town grew rapidly as the new center of the combined railroads and changed its name, becoming a city in just a short time. In 1881, the Roanoke Machine Works was founded, a set of shops that would grow to massive size and become the major employer in the Roanoke Valley for a century. The shops came under the control of the N&W in 1883, and the following year shops began building locomotives. Over the next nine years, the facility built 152 locomotives, all for the N&W, then suspended production. Antoine Sauter was one of its foremen. Builders plate on the N&W #611 Production resumed in 1900 at the facility, which had been renamed the Roanoke Shops in 1897. Over the next 53 years, the shops built 295 locomotives (and re-boilered two more). From 1927 to 1952, the shops built every steam locomotive acquired by the N&W. During the 1930s, they employed over 6,000 workers, who were working on 4 steam locomotives and 20 freight cars on any given day. Products included locomotives of all sizes and of increasingly better technology, from switching engines to the famed streamlined J-class passenger locomotives, the huge, articulated Y5 and Y6-classes for low-speed coal drags, and the A-class for fast freight service. In 1953, the shop built its last locomotive, the S1a-class #244, which was also the last steam locomotive manufactured in the United States for domestic use. After the N&W stopped using steam locomotives in 1960, J-class #611 and A-class #1218 were used to pull excursion trains from the early 1980s until the early 1990s. 1218 is now on display near its birthplace in a specially constructed pavilion at the Virginia Museum of Transportation in downtown Roanoke. Norfolk and Western 611 has been restored back to operation as of late May 2015. History from Wikipedia and OldCompany.com (old stock certificate research service)