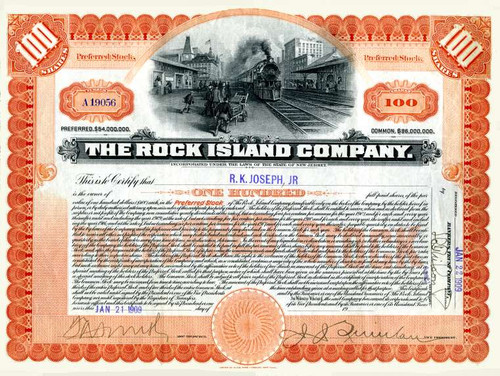 Beautifully engraved uncancelled Stock certificate from the Rock Island Company issued in 1902. This historic document was printed by the American Bank Note Company and has an ornate border around it with a vignette of a train pulling into a station in an urban area. This item is hand signed by the Company's Vice President and Assistant Treasurer and is over 101 years old. 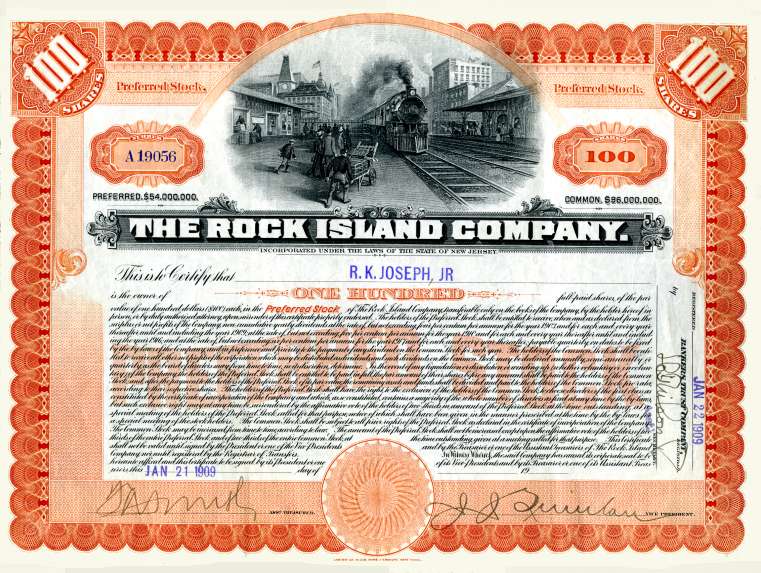 Certificate
The Rock Island Company was incorporated in the state of New Jersey in 1902. They were a holding company dealing in the stocks and bonds of the Rock Island Lines. The company controlled the Chicago, Rock Island and Pacific Railroad Company and the Rock Island Improvement Company. The Rock Island Company was consolidated into Chicago, Rock Island and Pacific Railroad Company on 1/1/1948. In the early 1920s Huddie Leadbetter otherwise known as Leadbelly, learned to sing and play The Midnight Special while serving time for murder in the Central State Farm at Sugarland Texas. It was about the Southern Pacific train that passed near the prison farm every day around midnight. Often the lights flashed through the cell windows and its whistle echoed across the landscape. It became a cruel reminder of life beyond the Sugarland fences Leadbelly also recorded Rock Island Line. The Rock Island Company laid tracks through Arkansas in the early 1900s and it started life as a work chant used by the railroad gangs. History from Encyberpedia and OldCompany.com (old stock certificate research service)