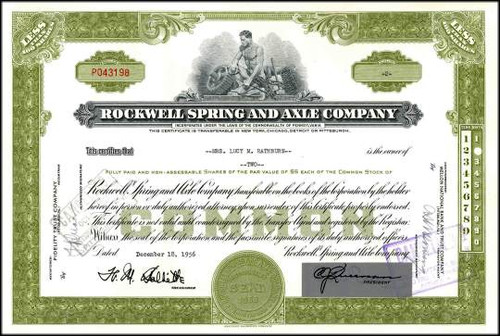 Beautifully engraved certificate from the Rockwell Spring and Axel Company issued no later than 1958. This historic document was printed by the Security Banknote Company and has an ornate border around it with a vignette of an allegorical man. This item has the printed signatures of the Company's President and Treasurer and is over 45 years old. 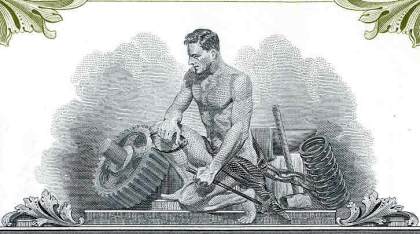 Certificate Vignette
Willard F. Rockwell, Sr. was born in Boston, Massachusetts in 1888. He began his career as an engineer in 1909 and by 1918 was the Vice-President in charge of Engineering and Manufacturing for the Torbensen Axle Company in Cleveland, Ohio. During World War I, he was commissioned a major in the Quartermaster Corps and helped to develop standard mobile equipment for the Army, particularly military truck axles and five-ton rear axle drives. He took over the small Wisconsin Parts Company in Oshkosh, Wisconsin in 1919, where he developed a substantial market for worm drive axles as truck production in the United States began booming. During the 1920s, he spent some of his firm's time and money to develop experimental models of truck and tank transmissions and drives for the Ordnance Corps since Congress had declined to do so. His firm was absorbed by the Timken-Detroit Axle Company, which made him Chairman of the Board in 1940 after he helped guide it through the Great Depression of the previous decade. By 1953, several of the firms he had previously led were amalgamated into the Rockwell Spring and Axle Company, renamed the Rockwell Standard Corporation in 1958. In 1966, North American Aviation merged with Rockwell Standard Corporation and became the North American Rockwell Corporation...now known as Rockwell International.