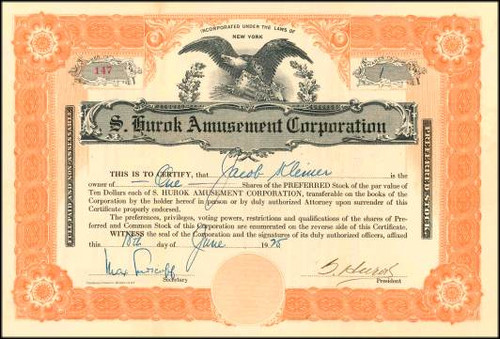 Beautifully engraved certificate from the S. Hurok Amusement Corporation issued in 1925. This historic document has an ornate border around it with a vignette of an eagle with a shield and arrows. This item is hand signed by the Company's President ( Solomon Hurok ) and Secretary and is over 78 years old. This is the first time we have seen this certificate.

Certificate Vignette
Solomon Hurok (Solomon Gurkov in the Ukrainian village of Pogar) (1888-1974) American impresario, b. Russia. Emigrating to the United States in 1906, Hurok was a peddler, streetcar conductor, bottle washer, and hardware salesman before becoming the foremost impresario of his age. By his own estimation, he presented more than 4,000 artists and companies, among them Pavlova, Marian Anderson, the ComÃ©die FranÃ§aise, the Old Vic Company, the Royal Ballet, AndrÃ©s Segovia, Jean-Louis Barrault, and Victoria de los Angeles. The film Tonight We Sing (1953) was based on his autobiography, Impresario (1946). Hurok's father ran a hardware store and taught him the business so he could follow in his footsteps. Although the family was Jewish, in an era marred by outbreaks of anti-Semitism, Hurok downplayed his Jewish background throughout his life, and re-created his past. There have been at least three books and a movie (Darryl Zanuck's Tonight We Sing) chronicling his life. S. Hurok Presents always appeared over the name of the performer or organization. The list of artists presented by Hurok was a who's who of the entertainment world. Pavlova, Chaliapin, Isaac Stern, Van Cliburn, Marian Anderson, Authur Rubinstein, The Royal Ballet, The Bolshoi Ballet, Margot Fonteyn and Rudolf Nureyev are just a few of the many famous names.