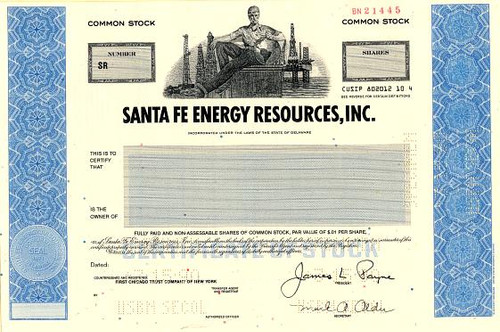 Beautiful engraved SCARCE specimen certificate from Santa Fe Energy Resources dated 1990. This historic document was printed by United States Banknote Company and has an ornate border around it with a vignette of an allegorical man. This item has the printed signatures of the Company's President, James Payne and Secretary and is over 18 years old. 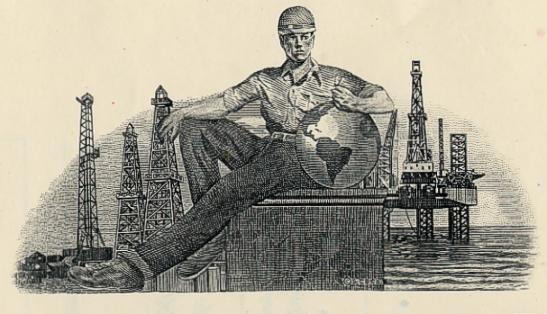 Certificate Vignette
Santa Fe Energy Resources and Snyder Oil Corporation merged on Wednesday, May 5, 1999. Santa Fe Snyder merged with Devon on August 29, 2000, and as a result, became a wholly-owned subsidiary of Devon Energy Corporation. Santa Fe Energy Resources was an independent oil and gas exploration and production company with headquarters in Houston, Texas. It had production in the United States, Argentina, Gabon, and Indonesia with additional exploration activities in other regions of the world. Santa Fe's shares were traded on the New York Stock Exchange under the symbol SFR. Snyder Oil Corporation was engaged in the production, development, acquisition and exploration of domestic oil and gas properties, primarily in the Gulf of Mexico, the Rocky Mountains and northern Louisiana. Snyder also has investments in two international exploration and production companies, Cairn Energy plc and SOCO International plc. Snyder's shares were traded on the New York Stock Exchange under the symbol SNY. Devon Energy Corporation is one of the larger independent oil and gas producers and independent processors of natural gas and natural gas liquids in North America. The company's portfolio of oil and gas properties provides stable, environmentally responsible production and a platform for future growth. About 88 percent of Devon's production is from North America. The company also operates in selected international areas, including Brazil, West Africa, the Middle East and China. The company's production mix is about 60 percent natural gas and 40 percent oil and natural gas liquids, such as propane, butane and ethane. Devon produces over 2 billion cubic feet of natural gas each day, about 3 percent of all the gas consumed in North America. Headquartered in Oklahoma City, Devon has approximately 4,400 employees worldwide. Devon is a Fortune 500 company and is included in the S&P 500 Index. Its common shares trade on the New York Stock Exchange under the ticker symbol DVN. History from Wikipeida and OldCompanyResearch.com. About Specimens Specimen Certificates are actual certificates that have never been issued. They were usually kept by the printers in their permanent archives as their only example of a particular certificate. Sometimes you will see a hand stamp on the certificate that says "Do not remove from file". Specimens were also used to show prospective clients different types of certificate designs that were available. Specimen certificates are usually much scarcer than issued certificates. In fact, many times they are the only way to get a certificate for a particular company because the issued certificates were redeemed and destroyed. In a few instances, Specimen certificates we made for a company but were never used because a different design was chosen by the company. These certificates are normally stamped "Specimen" or they have small holes spelling the word specimen. Most of the time they don't have a serial number, or they have a serial number of 00000. This is an exciting sector of the hobby that grown in popularity over the past several years.