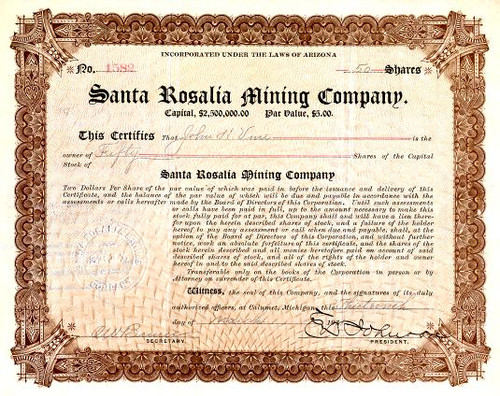 Beautifully engraved certificate from the Santa Rosalia Mining Company issued in 1911. This historic document was printed by the American Banknote Company and has an ornate border around it with the company's name on top center in fancy print. This item has the signatures of the Company's President, E. D. Johnson and Secretary, O. W Bruns and is over 98 years old. Located in an arroyo north of MulegÃ©, Santa RosalÃ­a is a mining town that dates to 1855. Founded by the French, the town has a European ambience and a distinctly Mexican culture. Pastel clapboard houses surrounded by picket fences line the streets, giving the town its nickname--ciudad de madera (city of wood). The large harbor and rusted ghost of its copper smelting facility dominate the central part of town bordering the waterfront. The town was a copper-mining center for years. Copper-bearing deposits, in blue-green globules called boleos, were discovered near here in 1868, and in 1885 a French mining company calling itself El Boleo acquired mineral rights to the area for 99 years. To help build over 600 km of mine tunnels, a large copper smelting foundry (imported by ship from Europe), a pier, and a 30-km mine railway, the French brought in Yaqui indians from Sonora; fresh water was piped in from the Santa Aqueda oasis, 16 km west. After smelting, the copper ore was shipped to Tacoma, Washington, for refining. Instead of returning empty, copper-transport ships brought lumber from the Pacific Northwest to Santa Rosalia, and, as the town grew, the French filled the arroyo and mesas on either side with wooden buildings to house workers, company officials, and Mexican soldiers. During EL Boleo's heyday in the 1940's, a sooty cloud issued constantly from the foundry's smokestack, hanging over the town. The operations continued until 1954, when the ore began to run out and the French sold its mining facilities back to the Mexican government. But problems plagued the facility, which closed permanently in 1985. Today, Santa RosalÃ­a is known for its manmade harbor--the recently constructed Marina Santa RosalÃ­a, complete with concrete piers, floating docks, and full docking accommodations for up to a dozen ocean liners. Because this is the prime entry point of manufactured goods into Baja, the town abounds with auto-parts and electronics stores.