Savings Bank of Griffin - Griffin is the Birthplace of Doc Holliday (Great Picture on Certificate) , Georgia 1895 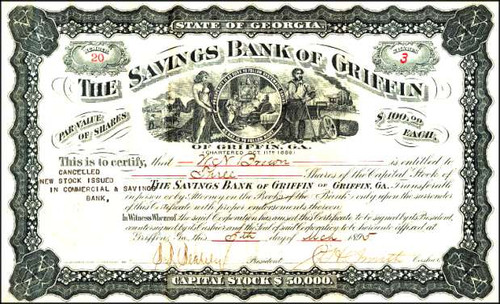 Savings Bank of Griffin - Griffin is the Birthplace of Doc Holliday (Great Picture on Certificate) , Georgia 1895

Beautifully engraved certificate from the Savings Bank of Griffin, Georgia issued in 1895. This historic document was printed by the Walker, Evans and Cogswell Company of Charleston, South Carolina. The certificate has an ornate border around it with a vignette of a farm scene and old train behind a blacksmith and woman who are on both sides of a family in their living room in front of a fire place. Around the border of the vignette it says "Prosperity is as sure to follow systematic savings, as day is to follow night". This item has the hand signatures of the Company's President, B. R. Blakely and Cashier, James Henry Smith. 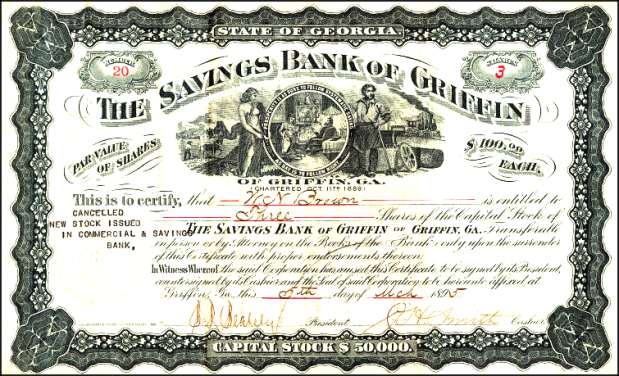 Certificate Vignette
The City of Griffin was founded by Lewis Lawrence Griffin, President of the Monroe Railroad and Banking Company. Our city played an important role during the Civil War, offering medical services and a hospital. There are many soldiers from both sides of the Civil War buried in Stonewall Confederate Cemetary, operated and maintained by the City of Griffin. Following the war, Griffin became a manufacturing center, and it maintains a large part of this image today. The City of Griffin, incorporated in 1843, is a vibrant and growing community that is home to approximately 23,000 residents. The city successfully combines old town charm with big city convenience to create a welcoming atmosphere. Griffin offers excellent schools and recreational facilities, as well as progressive businesses and industries. The City of Griffin offers a complete package of services, including electric, water & wastewater, curbside garbage pickup and other amenities. Griffin is approximately 40 miles south of Atlanta and 55 miles north of Macon. One of Griffin, Georgia's most famous residents, John Henry "Doc" Holliday, was born August 14, 1851 and baptized march 21, 1852 in the Presbyterian Church in Griffin. After receiving a degree from Pennsylvania College of Dental Surgery, he moved back to Georgia and had a successful practice in Downtown Griffin before ill-health forced his move out west. He died November 8, 1887 in Glenwood Springs, Colorado.