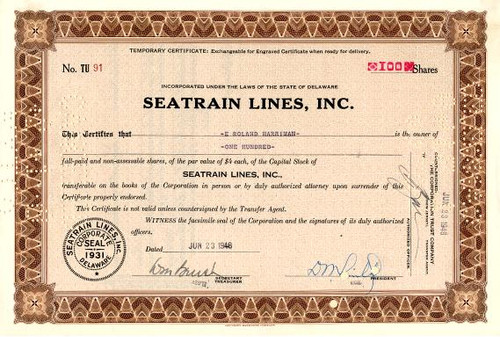 Beautifully engraved certificate from the Seatrain Lines, Inc. issued in 1948. This historic document was printed by Security Banknote Company and has an ornate border around it with the company's name on top center. This item is hand signed by the Company's Officers and is over 57 years old. The certificate is issued to E. Roland Harriman. Seatrain Lines was a major unsubsidized shipping company that was engaged in regularly scheduled common carrier container shipping and charter operations dor commercial and government shippers. The company also conducted shipbuilding operations. E. Roland Harriman, also known as Edward Roland Noel Harriman, (born December 24, 1895 in New York City - died February 16, 1978 in Arden, New York), was a financier and philanthropist. The youngest of five surviving children of Mary Williamson Averell and Edward Henry Harriman, a financier and executive of the Union Pacific Railroad and the Southern Pacific Railroad. Among his siblings was Averell Harriman, the financier and government official, four years his senior. Edward H. Harriman's estate was substantial, variously estimated between $70 million and $100 million upon his death in 1909. Harriman was educated at Groton, from which he graduated in 1913, and Yale University (B.A., 1917), where he was a friend and classmate of Prescott Bush. He married Gladys C. C. Fries on April 12, 1917, and they had two children. During World War I, Harriman served for ten months as an inspector with the rank of lieutenant in the United States Army Ordnance Department. Stricken with pneumonia and influenza, he was honorably discharged in January 1919. After regaining his health in California, he joined the Merchants Shipbuilding Corporation that November, a firm in which his brother Averell had an interest. In 1922, Harriman joined W. A. Harriman Company, investment bankers in New York City, and the following year, he became vice-president. In 1927 the two brothers formed the banking firm Harriman Brothers and Company, and in 1931 the firm was merged with Brown Brothers and Company, with Roland as vice-president. Headquartered on Wall Street, Brown Brothers Harriman started with nine partners and about two hundred employees. The firm performed specialized banking services for customers, mainly medium-sized corporations; it was not a member of the Federal Reserve System or the Federal Deposit Insurance Corporation. In 1968, Harriman and three other senior partners at Brown Brothers (Robert A. Lovett, secretary of defense under President Harry Truman; Prescott Bush, former senator from Connecticut; and Knight Woolley --all Yale men), moved "upstairs," literally and figuratively, to make way for the younger partners, one of whom was Robert Roosa, former undersecretary of the Treasury. In 1975, a few years prior to Harriman's death, there were twenty-nine partners and approximately one thousand employees. Harriman was a conservative Republican. An advocate of balanced budgets, he wrote articles on the subject for the Saturday Evening Post and the Review of Reviews in 1935; his speech on WEAF radio in August 1937 on the topic was reprinted in Vital Speeches of the Day (Sept. 15, 1937). Harriman followed the philanthropic example of his parents. He and his wife established the Irving Sherwood Wright professorship in geriatrics at New York Hospital-Cornell Medical Center and provided funds for cardiovascular research at the hospital. He joined the American Red Cross as a member of the board of governors in 1947, helped reorganize it after World War II, served as manager for the organization's North Atlantic area from 1944 to 1946, was its vice-president and national annual fund appeal chair in 1949, and was appointed its president by President Truman, to succeed General George Marshall in 1950. President Dwight Eisenhower reappointed him president in 1953. His other philanthropic board memberships included that of the American Museum of Natural History, for which he was also treasurer. History from Wikipedia.