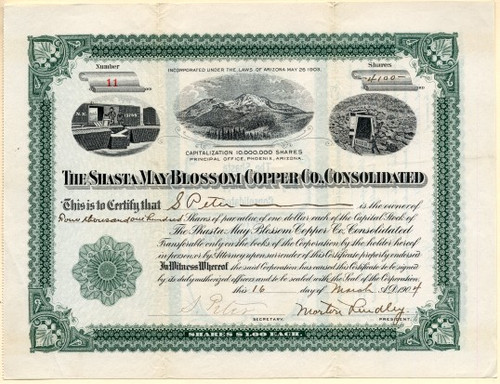 Beautiful certificate from the Shasta May Blossom Copper Co. Consolidated issued in 1905. This historic document was printed by Union Litho. Co., S.F.-Oakland and has an ornate border around it with three vignettes: top center of Mt. Shasta; top left workers loading boxcar; upper right miner pushing ore car into mine portal. This item has the signatures of the Company's President, Morton Lindley and Secretary, S. Peter and is over 105 years old.

Certificate Vignette
The Copper Handbook - 1913 SHASTA MAY BLOSSOM COPPER CO., CONS. CALIFORNIA Office: 1009 Mills Bldg., San Francisco, Cal. Mine office: Winthrop, Shasta Co., Cal. Col. Morton Lindley, pres.; Lucius A. Booth, vice-pres.; S. Peter, sec-treas., at last accounts. Organized 1903, under laws of Arizona, as a reconstruction of the Shasta May Blossom Mining & Smelting Co., capitalization $10,000,000, shares $1 par. Property, known as the Keith group, has 18 claims, about 300 acres, located 13 miles from a railway and 27 miles N. E. of Redding, in the Pittsburgh or Copper City district. The claims show prominent outcrops and have several deposits between porphyry footwalls and slate hangings. The main outcrop, said to be traceable about 1,500', shows ore giving assays of 2 to 7% copper and about $11.50 per ton in combined gold and silver values. The middle vein, 5 to 40' wide and said to be traceable 1,900', carries chalcocite, bornite and chalcopyrite ore, and is opened by tunnels of 200', 300' and 650', with about 1,500' of workings said to show a considerable tonnage of sulphide ore. The West vein, reported to be upwards of 100' in width, has a 100' shaft and 400' tunnel which show ore giving assays of 2 to 7% copper and $2 to $2,000 per ton in combined gold and silver values. The mine, as a whole, is reported to have about 3,500' of workings. Equipment includes a gasoline hoist, air compressor and electric light and power. There is a 20x90' machine shop covered with corrugated iron.