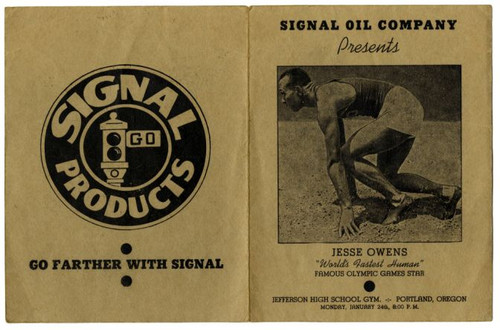 Signal Oil Company Program autographed by Jesse Owens no later than 1947. The program is from a track exhibition by Jesse Owens and a Basketball Game between the Signal Oilers VS Owens Olympic Colored Stars. 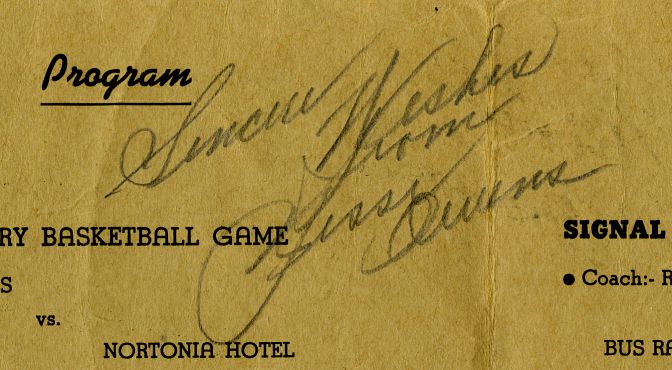 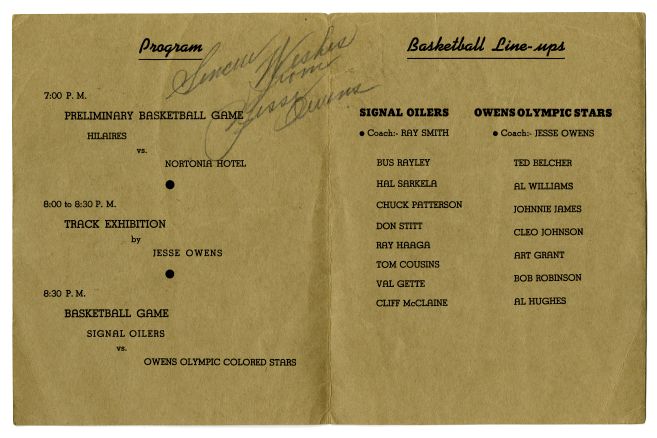 Program and Line-ups
James Cleveland "Jesse" Owens (September 12, 1913 March 31, 1980) was an American track and field athlete who specialized in the sprints and the long jump. He participated in the 1936 Summer Olympics in Berlin, Germany, where he achieved international fame by winning four gold medals: one each in the 100 meters, the 200 meters, the long jump, and as part of the 4x100 meter relay team. He was the most successful athlete at the 1936 Summer Olympics, a victory more poignant and often noted because Adolf Hitler had intended the 1936 games to showcase his Aryan ideals and prowess. The Jesse Owens Award, USA Track and Field's highest accolade for the year's best track and field athlete, is named after him, in honor of his significant career. Under the sponsorship of Signal Oil Products, Jesse Owens made an event appearance at Portland, Oregon's Jefferson High School. As the "World's Fastest Human," his duties that January 24th were to perform a "Track Exhibition," and to coach his "Olympic Colored Stars" in a game of basketball against the "Signal Oilers." The program measures 5" x 6-1/2", the medium is a simple fold-over in excellent conditionn. The Jesse Owens signature is in the center of the program and is clean and bold. The Signal Products' logo shown in the program was used by the company from 1931 to 1947. History from Wikipedia and OldCompany.com (old stock certificate research service)