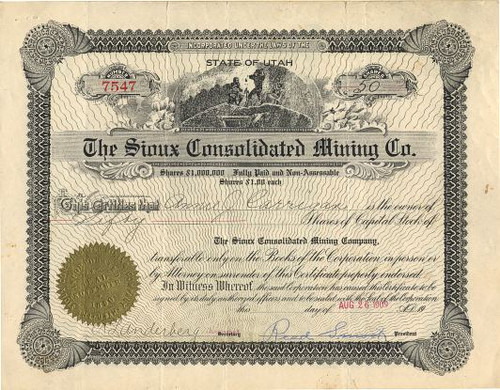 Beautiful certificate from the Sioux Consolidated Mining Co issued in 1909. This historic document was printed by Utah Litho Company and has an ornate border around it with a vignette of a group of mine workers. This item has the signatures of the Company's President, Reed Smoot and Secretary, R. L. Anderberg and is over 100 years old.

Certificate Vignette
As reported in the Mines register - 1918: SIOUX CONSOLIDATED MINING CO. UTAH Succeeded Nov. 30, 1917 by Sioux Mines Co., receiving 493,470 shares for entire assets. Provo; Utah. Officers: Reed Smoot, pres.; R. L. Anderberg, sec. Inc. about 1890. in Utah. Cap., $1,000,000; outstanding, $745,387; shares $1 par. Listed in Salt Lake City. Has paid total dividends of $872.105: last one of 4 cts. per share July 25, 1911. No report was issued for 5 years and stock was practically dead on the Exchange, quoted around 3c. In Feb.. 191'1 it jumped to 24c, attributable to the reported strike of high-grade copper ore at depth in the adjoining Iron Blossom. Property: 6 patented claims at Eureka in Tintic mining district, said to show silver-lead ore. Many years were spent in developing the prospect and then it was allowed fo lie idle for a number of years. About 1907 work was resumed and ore found in 1908; this put the mine on a dividend basis for a time. Known ore reserves were exhausted in 1911 and mine closed down in May, 1912, to be worked since in a desulotry way by lessees. Development: by shaft to the 1,000' level. In April, 1916, the company resumed work: sank the shaft from 600' to 1,000' level. Drifts for about 5001 E. on the 800' and 1,000' levels in search of the continuation of the orebody recently found in the Iron Blossom, failed to find commercial ore. Considerable quartz has been found that management believes that ore will be found at greater depth. As company has no unissued stock and is in debt, it must borrow or reorganize. On Nov. 8,1917, a meeting was held and sale approved of company's entire assets to the Sioux Mines Co. (to be organized) with 1,000,000 shares capital; 500,000 shares to be issued in payment, balance to be used for working capital and for clearing indebtedness.