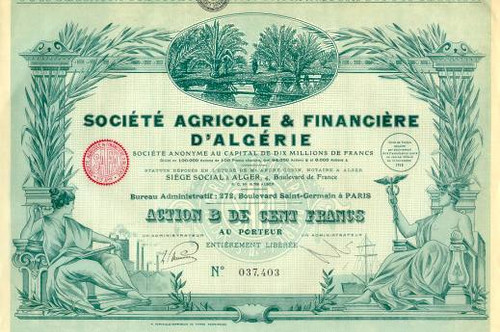 Beautifully engraved Certificate from the Societe Agricole & Finance D' Algerie issued in 1928. This historic document has an ornate border around it with a vignette of a planatation with images of allegorical figures sitting in front of a factory and sailing vessel. This item is handsigned and is over 72 years old. Algeria has the longest distances of North Africa, the dramatic and green coast of the north, mountains with people of strong cultural identity, endless desert, breathtaking oases, and vulcanic mountains. Algeria has had its appeal in low tourist numbers, and a cultivated and hospitable people. Today however, normal travelling in Algeria is very difficult and heavily resticted due to the ongoing conflict of the country. Among the things you're more likely to do in Algiers, is going to museums. These are spread all around the city, and many of them are actually worth visiting. The French city, which is far more predominant here than in any other North African city, is not all in all to well kept. Many areas are very nice, but oh so European. Still the waterfront area, facing east. is beautiful, and if it wasn't for all the veil carrying women around you, you could have been in France. The old city of Algiers is one of the worst to be found in North Africa. If you want to see real slum, this is the place. This has been one of the most dangerous places for foreigners to visit, during the upheavals the last years. Entering this place is still a suicidal act. Despite it's size Algiers was not among the best places to eat, fast food was the frustrated traveller's choice. But if you're ready to move around the whole city, you can visit a new, good restaurant for at least a fortnight. The monument above all other Algerian monuments is the 100 metre tall Martyr's Monument, some three km out from town centre. It's a big open square, with the monument in the middle. The whole structure can virtually be seen from wherever you are in Algiers, but most of all, from the sea.