Beautifully engraved certificate from the Societe Des Automobiles Simca issued in 1967. This historic document was printed in paris and has an ornate border around it with a vignette of the Chrysler logo. This item has the printed signatures of the Company's President and Administrator and is over 39 years old. 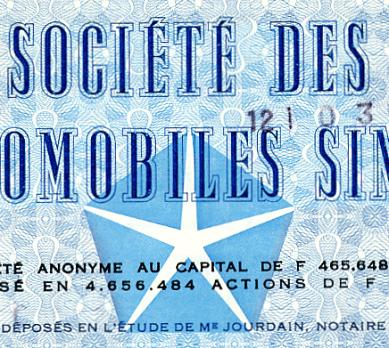 Certificate Vignette
Simca is a now-defunct French automobile manufacturer, which also produced cars in Brazil in the 1960s. The name SIMCA stands for SociÃ©tÃ© Industrielle de MÃ©canique et de Carrosserie Automobile. The founder of Simca was Henri Pigozzi who at first manufactured Fiat models in France. The first Simca factory was in the French town of Nanterre. All this happened from 1934 up to 1951. The Simca Aronde was the first true Simca car (and not a Fiat replica) and was launched in 1951. It had a 1200 cc engine and its production reached 100,000 units yearly. After this success, Simca took over the French truck manufacturer Unic in 1951, the Poissy plant of Ford (France) in 1954 and in 1958 it bought the brand Talbot. The American car manufacturer Chrysler Corporation, who wanted to enter the European car market, gained 15% of the Simca stocks (together with the British manufacturer Rootes), and all the Simca models manufactured after 1967 had the Chrysler pentastar logo as well. In 1961 Simca started to manufacture all of its models in the ex-Ford France factory in Poissy and sold the factory at Nanterre to CitroÃ«n. The rear engined Simca 1000 was introduced in 1961. The most successful pre-Chrysler Simca models were the Aronde, the Simca 1000 and the front engined 1100 compact car. During the late 1970s Chrysler era, Simca produced the new 1307 range (Chrysler Alpine in the UK) and later the Horizon, both of which were European Car of the Year on their launch. However, Chrysler's forced marriage of Simca and Rootes was not a happy one, and Chrysler Europe collapsed in 1977 and the remains were sold to Peugeot the following year. The Rootes models were quickly killed off, and the Simca-based Alpine/1307 and Horizon soldiered on through the first half of the 1980s using the resurrected Talbot badge. Peugeot eventually grew tired of the Talbot brand, and the last Simca design was launched as Peugeot 309 (instead of Talbot Arizona as had been originally planned), and this was the end of this French brand. The Peugeot 309 used Simca engines until October 1991 when they were replaced by PSA's own TU and XU series of engines. The 309 was produced at the former Rootes factory in Ryton-on-Dunsmore, UK as well as in the Poissy plant. Simcas are still on the road in some European countries and were also manufactured in Brazil, Spain and Sweden. After the end of the Simca brand, the construction line of the Simca 1307 was transferred to the USSR by Moskvitch and was used to build the Moskvitch Aleko whose exterior characteristics are almost exactly the same as the French model. The Moskvitch company claims that the similarities with the Simca 1307 have to do only with the exterior of the car. History from Wikipedia.