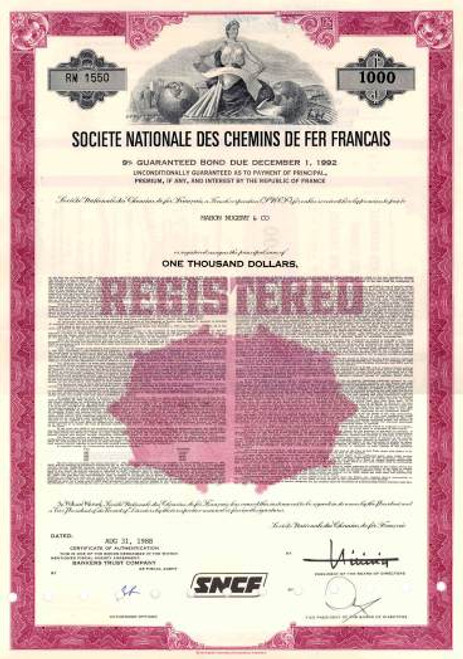 Beautifully engraved certificate from the Societe Nationale Des Chemins De Fer Francais issued in 1970's - 1980's. This historic document was printed by the Security-Columbian Banknote Company and has an ornate border around it with a vignette of an allegorical woman between two globes. This item has the printed signatures of the Company's President of the Board of Directors and Vice President of the Board of Directors and is over 14 years old. 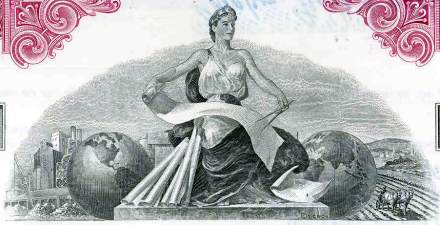 Certificate Vignette
The French rail system, under the guidance of Societe Nationale des Chemins de fer Francais (SNCF), or French Rail Inc., uses pneumatic suspension, high-performance brakes and electrical en-ergy to operate trains at speeds up to186 mph (300 kph) over high-speedtracks.One of the adaptable features of thistechnology is that the trains can oper-ate on conventional tracks by reducingspeeds to 137 mph (220 kph). High-speed tracks are dedicated to passen-ger traffic; they are straighter andmore streamlined than conventionaltracks. Where they connect with con-ventional lines, the TGV can simplyslow down and travel into congestedcity centers using existing infrastruc-ture.The first TGV line, the TGV Southeast,opened in 1981. By 1983 travel timefrom Paris to Lyons (264 mi./425 km.)had been cut by about 50 percent, tojust two hours, by trains operating atspeeds up to 168 mph (270 kph).The TGV Southeast has been notablysuccessful as well as fast: Rail traffichas increased 86 percent since 1980 .A second line, the TGV Atlantic,opened in September 1989; a 65-mile(105-km.) connection was completed ayear later and opened up a Paris-to-Bordeaux route. Compared with con-ventional trains, travel times havebeen cut nearly in half.