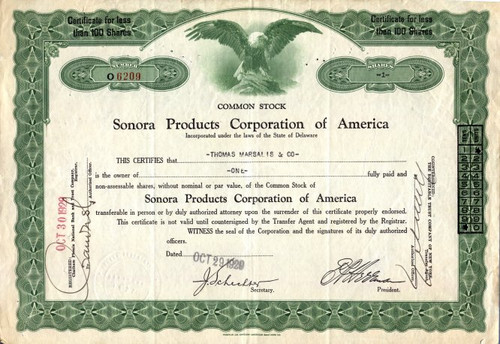 Beautifully engraved certificate from the Sonora Products Corporation of America dated October 29, 1929. This historic document was printed by the Franklin Lee Banknote Company and has an ornate border around it with an image of an eagle. This item has the printed signatures of the Company's President and Secretary. 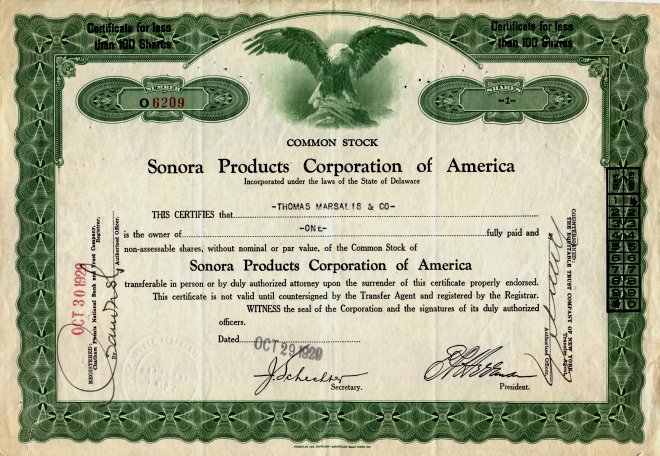 October 29, 1929 date on certificate
October 29, 1929 (Black Tuesday), was the beginning of the Market Crash and Depression. Within the first few hours the stock market was open, prices fell so far as to wipe out all the gains that had been made in the previous year. A then-record 16.4 million shares changed hands, causing bedlam on the floor of the New York Stock Exchange as investors sent in orders faster than traders could possibly fill them. The Dow Jones Industrial Index closed at 230. Since the stock market was viewed as the chief indicator of the American economy, public confidence was shattered. Between October 29th and November 13th (when stock prices hit their lowest point) over $30 billion disappeared from the American economy. Banks and brokerages went out of business. The broader economy completely collapsed, putting many Americans out of work for years. It took a long time and a world war for the markets to recover. History from Encyberpedia and OldCompany.com (old stock certificate research service)