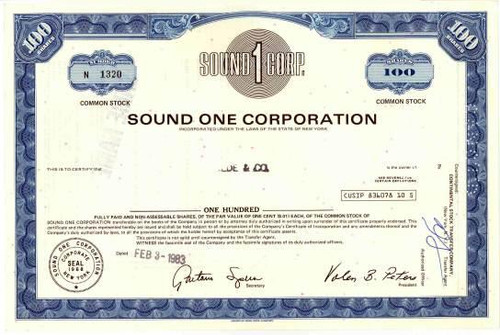 Beautifully engraved Certificate from the Sound One Corporation issued in the 1980's. This historic document was printed by the American Banknote Company and has an ornate border around it with a vignette of the company's logo. This item has the printed signatures of the company's officers and is over 14 years old. 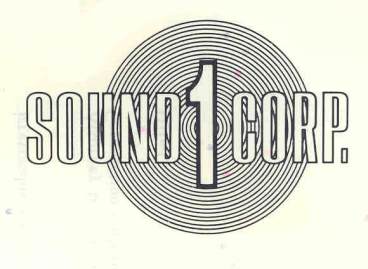 Certificate Vignette
Sound One Corporation was acquired by Liberty Livewire Corporation in 1999. The Company was incorporated in Delaware in 1952 and is now the world's leading independent provider of technical and creative services to the entertainment industry. They provide audio and video post-production, transmission, library services, Internet hosting, and audio/video distribution services via satellite and fiber for the major television producers, motion picture studios, cable and broadcast networks, advertising agencies, and other entertainment content companies. They also provide interactive television services. Their services integrate and apply a variety of systems and processes to enhance the creation and distribution of entertainment content. ToddAO / Liberty is the result of the combination of certain key companies with long standing track records and respected brand names offering "cradle-to-grave" services. Livewire is under the direction of a management team that has extensive experience in running worldwide operations in both traditional and new media Content Preparation (post-production sound and visual effects), Content Management (film, tape, and digital libraries), as well as Content Distribution (freight, fiber, satellite, and Internet) services. Equipped with the latest technologies and staffed with talented professionals and artists, the Company offers film and television producers, directors and studios, as well as television advertisers effective solutions to their creative needs. The Company's technology outsourcing solutions offer clients low operating costs, improved response time and reliability, access to new technology and high standards of quality recognized by the international technical community. The Company was created through the following transactions: On April 7, 2000, Liberty Media acquired 100% of Four Media Company's ("4MC") issued and outstanding common stock. On June 9, 2000, Liberty Media acquired 60% of the outstanding equity (representing approximately 94% of the voting power) of the registrant through the Todd Merger, a stock transaction valued at $109 million. On the same day, Liberty Media contributed all of the issued and outstanding shares of 4MC to Livewire in exchange for Livewire Class B Common Stock valued at $279.7 million. In July 2000, Liberty Media acquired certain assets of SounDelux Entertainment Group of Delaware, Inc. ("SounDelux") through a single-member limited liability company for $90 million in cash. Liberty Media then contributed ownership of the LLC to Livewire in exchange for new Livewire Class B Common Stock valued at $90 million. The registrant's Class B Common Stock and Class A Common Stock are identical, except that the Class B Common Stock has ten votes per share and is convertible into Class A Common Stock at any time at the option of the holder. In July 2000, Livewire acquired privately held Triumph Communications Group ("Triumph") in a combined cash and stock transaction valued at $50.3 million. In August 2000, Livewire acquired all of the outstanding shares of Soho Group Limited ("Soho") through a wholly owned subsidiary for approximately $27.2 million in cash and assumed debt. In October 2000 Livewire acquired all of the outstanding shares of Visiontext Limited ("Visiontext") for (pound)3.7 million ($5.4 million) in cash. On July 25, 2000, Liberty, Livewire, AT&T and a wholly owned subsidiary of AT&T signed a merger agreement with Video Services Corporation ("VSC") to acquire all of the outstanding capital stock of VSC in a cash and stock transaction valued at approximately $110 million. On December 22, 2000, in accordance with that agreement, AT&T acquired and immediately transferred to Liberty, 100% of the outstanding capital stock of VSC. On December 22, 2000, pursuant to a Contribution Agreement, Liberty contributed to Livewire 100% of the outstanding capital stock of VSC. Livewire financed the contribution and acquisition of VSC with a convertible note in the principal amount of approximately $93 million issued under a First Amended and Restated Credit Agreement with Liberty (the "Liberty Subordinated Credit Agreement") and with funds provided by Livewire's institutional lenders. On February 1, 2001, Livewire acquired substantially all the assets of the business unit known as "Group W Network Services" ("GWNS") from Viacom, Inc. and certain affiliates of Viacom, for $116.5 million in cash and assumed debt, subject to a post-closing working capital adjustment. Livewire financed the acquisition of Group W Network Services primarily with a convertible loan under the Liberty Subordinated Credit Agreement and borrowings from Livewire's institutional lenders.