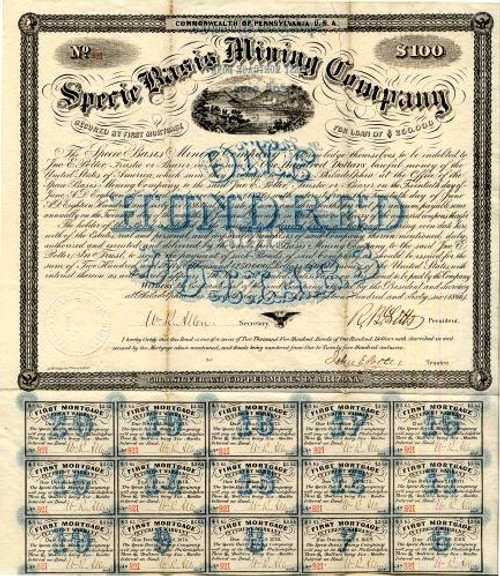 Beautifully engraved uncancelled certificate from the Specie Basis Mining Company issued in 1866. This historic document was printed by Jas M. Guigan Lith and has an ornate border around it with a vignette of mill next to a river at top. Blue underprint "One Hundred Dollars". The bottom of the certificate says "Gold, Silver and Copper Mines in Arizona". The company was incorporated in Pennsylvania in 1866. This item has the signatures of the Company's President, R. B. Gitts, Trustee John E. Potter and Secretary, William R. Allen and is over 150 years old. 15 unused coupons attached on bottom. 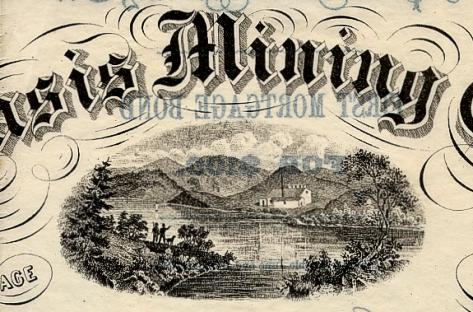 Certificate Vignette
Arizona. Pinal. Mineral Creek. Specie Basis Mining Co. According to Holabird, the name on this certificate is among the best in western American mines. Specie basis refers to an antiquated monetary payment methodology revolving around gold and silver, which were called specie. The term specie basis refers to payment "in kind" as we say today, or payment in gold or silver. The stock certificate states "Gold, Silver, and Copper Mines in Arizona". We were unable to find specific reference to the company in J. Ross Brown's 50pp section on Arizona mines published in 1868. There is a strong possibility, however, that this company is directly related to the Specie Pay mine. Burchard in 1882 reported that the Specie Pay mine was driving a new tunnel in 1881 in ore that averaged $42 per ton. It had apparently been reactivated after some time of dormancy. Hamilton, in 1884 cited this mine as the key mine in the district along with the Alice mine. The ore was reported to run $30 per ton, and a mill was erected on the Alice about 1882, producing pay ore on a regular basis. Burchard had noted that the district was in desperate need of a custom mill, and the Alice mill must have been a welcome addition after years of prospecting with no local reduction works. The vignette depicts a mill on a river, which may have been the company's goal at one time. The district is about 15 miles northeast of Florence in central Arizona. The chances of the Specie Basis Mining Co and a Specie Pay mine being related are extremely high. These are uncommon terms not used haphazardly. Very rare. This Gitts may be related to the Gitts of the Casa Grande scam.