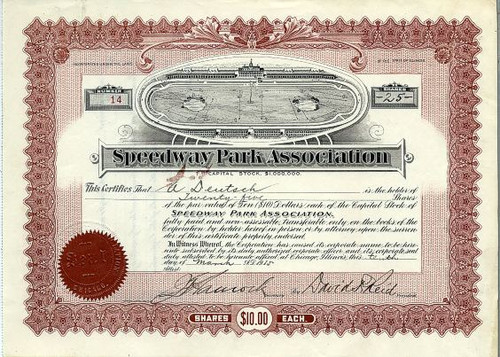 Beautiful certificate from the Speedway Park Association issued in 1915. This historic document was printed by the Weber Lithograph Company and has an ornate border around it with a vignette of an auto Racing Track surrounded by a grandstand with a 18 hole golf course in the center. This item has the signatures of the Company's President, David F. Reid and Secretary, J. Hancock and is over 99 years old. This is the earliest auto racing stock certificate we've seen.

Certificate Vignette
The Speedway Park Association (also known as the Speedway Park Club) was incorporated under the laws of the State of Illinois on May 27, 1914. The certificate of incorporation was recorded on June 19, 1914. The Association contract for the construction of a two mile board track to be completed by June 1, 1915. The Association's land was listed as "320 acres of level ground situated on the west side of Chicago west of the Des Plaines River, bounded on the north by Roosevelt Road and south to Cermak. The east and west boundary was First Avenue to Ninth Avenue. The site was serviced by the following transportation lines: Madison Street car line, Twelfth Street car line, Lake Street car line, Soo Line railroad. Chicago and Great Western Railroad, Metropolitan Elevated Aurora Elgin and Chicago Railroad, Chicago and Northwestern Railroad and the Illinois Central Railroad, which entered the grounds." Actual construction worked started on April 19, 1915. The land was vacant so no "wrecking" was required. The track surface was constructed with two by fours laid edgewise and running in the direction of planned traffic flow and spaced with a quarter inch gap between the boards. The supports were made of wood spaced with a quarter inch gap between them. The track was 60 feet wide on the homestretch and 70 feet wide on the turns. The back stretch was 50 feet wide. A golf course, polo field, equestrian course and aviation field were planned. The first derby on Speedway Racetrack was on June 26, 1915. A gala grand opening occurred. The pictures to the left and right are of the parade before the race. We thank Mary Tierney of Naperville for sending us these photographs. Twenty-one cars began the race at 10:30 A.M. Five hours, seven minutes and twenty-six seconds later Dorio Resta won flashed across the finish line driving a French Peugeot. Resta set a world record, traveling 500 miles faster than any man ever had. He beat by more than 50 percent the previous record set by a railroad train. His average speed was 97.58 miles per hour. Eleven drivers followed the Italian across the tape to claim a part of the $54,000 purse. Of the twelve cars finishing, ten had broken the previous world's record for distance. On August 7, 1915, a match race between four of the best drivers in the world was run. Dorio Resta, winner of the derby, romped home a victor over Earl Cooper, Barney Oldfield and Bat Burman, the American favorites. His time was 58.54 and for the first time in history of motor competition, a man driving against others had crowded 100 miles into less than one hour. It is worthy to note that America's first auto race was won in a field of ten at Chicago on Thanksgiving Day 1895, at the speed of less than 10 miles per hour (not at the Speedway Track). Another Speedway race of note was the International Derby 300 mile race. The winner was Dorio Resta with a speed of 98.61 miles per hour on June 10, 1916. Another race was the 100 Mile handicap, the winner being Louis Chevrolet driving a Frontenac. His speed was 108 miles per hour and the attendance was approximately 40,000. On July 28, 1918, Ralph DePalma won the International Sweepstakes. The crowd was estimated at 15,000 in the grandstand, bleachers and paddock. The awards were: DePalma, $17,000 Chevrolet, $5,000 Resta, $3,000 Mulford, $1,500 Vail, $500. The park grandstand and open field seats suitable for aviation meets had a capacity of 200,000. Despite the thrilling races and crowds, the race track apparently was not a financial success. After a very few years of thrilling racing and costly law suits all the land owned by the Association was taken over by Edward H. Thomas (Vice President of the Hines Lumber Company of Chicago, Illinois) and his wife Frances C. Thomas through legal actions in March of 1920. The land was transferred from Miss Emily Ogden Butler of Scarsdale, New York, and the Speedway Association. The Fate of the Speedway A committee from the Surgeon General's Office of the Army was ordered to Chicago for the purpose of making a preliminary survey and to recommend sites for hospital use. Apparently two sites were under consideration -- the Field Museum and Speedway Race Track reservation during World War I to erect a convalescent hospital in the so-called "Big Ten Area". The hospital was designed for wounded and disabled troops returning from overseas and those who had incurred disabilities in the various camps of the States. The patients were to be discharged when maximum benefits of hospitalization had been reached and then sent to their homes in the nearby states. The committee from the Surgeon General's Office decided on the Speedway site. Arrangements were made with Edward Hines, Sr., to erect a convalescent hospital. Contracts were let to the Shank Construction Company and the beginning of construction was set for 1918. www.FranzosenbuschHeritageProject.org Sources were used in the compilation of this entry include but are not limited to: Records and materials supplied from the archives of Broadview Historical Society--courtesy of Michael Kaminski A history of this the Edwards Hines Hospital and its site was been compiled by a patient of the hospital, Mr. Ralph Cragg. Mr. Cragg gathered the information from the Chicago Historical Society, the Chicago Public Library, the Municipal Library of Chicago and the Hospital Library as well as other sources. We commend Mr. Cragg and his resourcefulness and initiative which made this interesting history available.