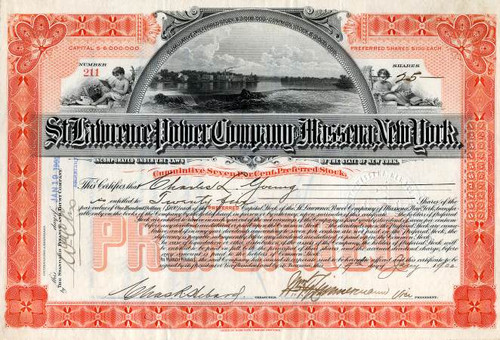 Beautiful uncancelled certificate from the St. Lawrence Power Company of Massena, New York issued in 1900. This historic document was printed by the American Bank Note Company of New York and has an ornate border around it with a vignette of palnt on a river flanked by two boys. This item has the signatures of the Company's President and Secretary, and is over 110 years old. The certificate was issued to and signed on the back by Charles L. Young.

Certificate Vignette
The St. Lawrence Power Company of Massena, New York was transformed into the St. Lawrence River Power Company in 1902. Massena is a town in St. Lawrence County, New York, United States. The town is on the northern border of the county and is nicknamed "The Gateway to the Fourth Coast". The population was 13,121 at the 2000 census.[1] The town of Massena contains a village also called Massena. The town and its village are named after a hero of the Napoleonic Wars. Massena is home to an Alcoa plant, and a former Reynolds Metals Company plant, now called Alcoa East (temporarily idled in July 2009). Massena is also home to a former General Motors aluminum engine-casting plant that is one of the most polluted sites once owned by the company.The New York Power Authority also operates a hydroelectric power generating dam, the St. Lawrence-FDR Power Project, on the St. Lawrence River adjacent to Massena.