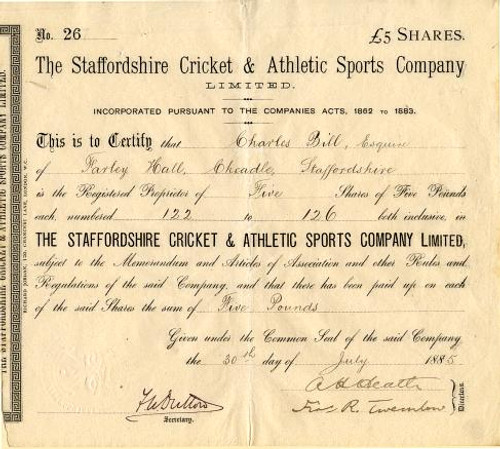 Beautiful certificate from the Staffordshire Cricket & Athletic Sports Company Limited issued in 1885. Certificate #26 issued to Charles Bill, Esquire of Farley Hall, Cheadle, Staffordshire, for five shares of £5 each; signed by the secretary and two directors; on the watermarked paper Ansell 1884, with an embossed company seal in the left lower corner, and is over 122 years old. Charles Bill (1843-1915) was a Conservative MP between 1892-1906 for Leek. Cricket game in Staffordshire was first mentioned in the 1817 and the Staffordshire Country Cricket Club was established in the 1871. Dimensions: 20.3 by 23 cm. Condition: typical fold, two tiny staple holes in the upper left corner, otherwise in general very good condition Cricket is a bat and ball sport played between two teams, usually of eleven players each. A cricket match is played on a grass field (which is usually roughly oval), in the centre of which is a flat strip of ground 22 yards (20.12 m) long, called a pitch. At each end of the pitch is a set of three parallel wooden stakes (known as stumps) driven into the ground, with two small crosspieces (known as bails) laid on top of them. This wooden structure is called a wicket. A player from the fielding team (the bowler) bowls a hard, fist-sized cork-centred leather ball from one wicket towards the other. The ball usually bounces once before reaching a player from the opposing team (the batsman), who defends the wicket from the ball with a wooden cricket bat. The batsman, if he or she does not get out, may then run between the wickets, exchanging ends with the other batsman (the "non-striker"), who has been standing in an inactive role near the bowler's wicket, to score runs. The other members of the bowler's team stand in various positions around the field as fielders. The match is won by the team that scores more runs. Cricket has been an established team sport for hundreds of years. It originated in its modern form in England and is popular mainly in the present and former members of the Commonwealth. In the countries of South Asia, including India, Pakistan, Bangladesh, and Sri Lanka, cricket is the most popular sport. It is also a major sport in places such as England and Wales, Australia, New Zealand, South Africa, Zimbabwe, Bermuda, and the English-speaking countries of the Caribbean, which are collectively known in cricketing parlance as the West Indies. There are also well established amateur club competitions in countries as diverse as the Netherlands, Kenya, Nepal and Argentina, among others; there are over one hundred cricket-playing nations recognised by the International Cricket Council.[1] The sport is followed with passion in many different parts of the world. It has even occasionally given rise to diplomatic outrage, the most notorious being the Basil D'Oliveira affair which led to the banning of South Africa from sporting events. Other examples include the Bodyline series, played between England and Australia in the early 1930s, and the 1981 underarm bowling incident involving Australia and New Zealand. History from Wikipedia and OldCompanyResearch.com.