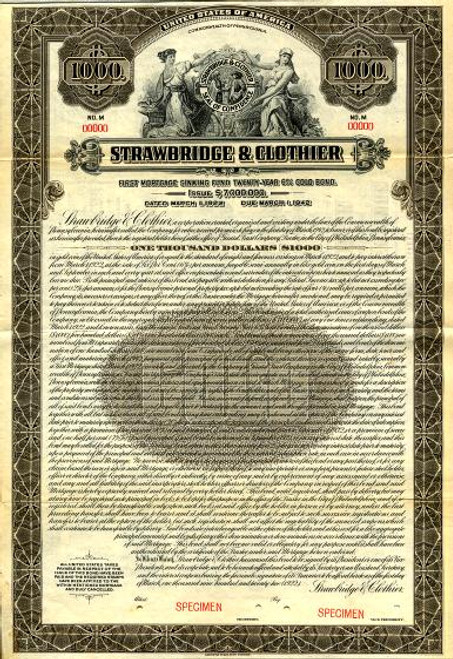 Beautiful engraved RARE Gold Bond Specimen certificate from the Strawbridge & Clothier dated in 1922. This historic document was printed by American Bank Note Company and has an ornate border around it with a vignette of two allegorical women next to the company logo. This item is over 85 years old. 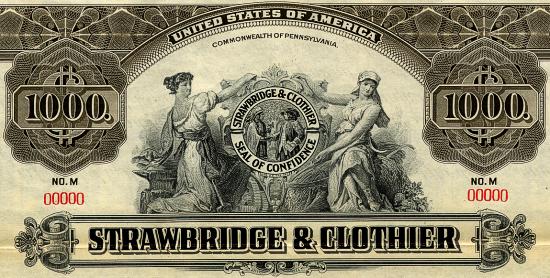 Certificate Vignette
Strawbridge's (formerly Strawbridge & Clothier) was a department store found in the northeastern United States with stores in Delaware, Pennsylvania and New Jersey. It was part of May Department Stores until that company's August 30, 2005 acquisition by Macy's Inc.. May had operated it under its Arlington County, Virginia-based Hecht's division. The historical flagship store was located in downtown Philadelphia at The Gallery at Market East. It was announced March 10, 2006 that this store would close on June 1, but it actually shut its doors on May 23. On February 1, 2006, the former May Company division were dissolved and operating control of the Strawbridge's stores was assumed by Macy's East. On September 9, 2006, the Strawbridge's and Hecht's nameplates were completely phased out in favor of the nationally known Macy's. The store began as a dry goods store and was founded by Quakers Justus Clayton Strawbridge (1838-1911) and Isaac Hallowell Clothier (1838-1911) in Philadelphia in 1862. In 1868 Strawbridge & Clothier purchased a 3-story brick building on the northeast corner of Market and 8th Streets in downtown Philadelphia, which had been Thomas Jefferson's office in 1790 while he served as Secretary of State, and opened their first store. But soon the old building was replaced by a new 5-story department store offering a variety of fixed price merchandise under one roof. In 1928, this building was replaced by a new store and became one of the anchors in 1977 of The Gallery, an urban mall connecting Strawbridge & Clothier with Gimbels. A Strawbridge & Clothier store in Echelon Mall (Voorhees, New Jersey)The 13 Strawbridge & Clothier department stores were bought by May Department Stores Company in 1996 when the Strawbridge & Clothier corporation elected to liquidate its operations (it also operated the Clover discount department store chain). At the time of the May acquisition, the Strawbridge's name was retained, and the Philadelphia area Hecht's stores (the former John Wanamaker locations, which May had acquired in a bankruptcy sale in 1995) also adopted the name. However, the Strawbridge & Clothier head office was closed and its operations were consolidated with Hecht's in Arlington, Virginia. After the sale the stores operated simply as Strawbridge's, although exterior signage reading Strawbridge & Clothier remained in place at many locations until the stores became Macy's in 2006. In July, 2006, The Pennsylvania Real Estate Investment Trust (PREIT), owners of The Gallery at Market East, agreed to purchase the lower floors of the flagship Strawbridge's store. It is anticipated that PREIT will seek retail tenants for the areas of the building closest to street level but may convert some higher floors to office space. The uppermost floors had previously been sold and converted to offices; they are currently owned by American Financial Realty Trust of Jenkintown. History from Wikipedia and OldCompanyResearch.com. About Specimens Specimen Certificates are actual certificates that have never been issued. They were usually kept by the printers in their permanent archives as their only example of a particular certificate. Sometimes you will see a hand stamp on the certificate that says "Do not remove from file". Specimens were also used to show prospective clients different types of certificate designs that were available. Specimen certificates are usually much scarcer than issued certificates. In fact, many times they are the only way to get a certificate for a particular company because the issued certificates were redeemed and destroyed. In a few instances, Specimen certificates we made for a company but were never used because a different design was chosen by the company. These certificates are normally stamped "Specimen" or they have small holes spelling the word specimen. Most of the time they don't have a serial number, or they have a serial number of 00000. This is an exciting sector of the hobby that grown in popularity over the past several years.