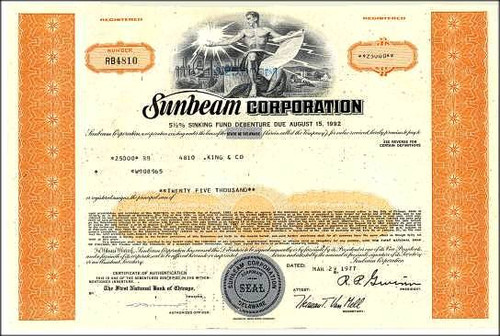 Beautifully engraved certificate from the Sunbeam Corporation issued before 1978. This historic document was printed by the American Banknote Company and has an ornate border around it with a vignette of an alegorical man in front of a power plant. This item has the printed signatures of the Company's President and Secretary and is over 27 years old. 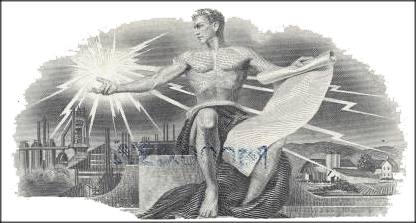 Certificate Vignette
Since the introduction of the first electrical appliance in 1910, Sunbeam Corporation has grown to a position of leadership in the small home appliance industry. The company has made numerous contributions to the industry through product innovation and product improvement. The company was founded in Chicago in 1897 by John K. Stewart and Thomas J. Clark to manufacture mechanical horse clippers, and later added sheep shearing equipment to its line. The firm was named Chicago Flexible Shaft Company. Its original home appliance, an electric iron, was produced in 1910 to offset the seasonal nature of the clipping and shearing business. Further diversification occurred in 1920 when the company brought out the first automatic lawn sprinkler marketed in this country. Electric toasters were added in 1922, coffeemakers in 1929 and food mixers in 1930. The latter established the company as a major factor in the portable appliance and consumer goods industry. Over the years, the company has earned a reputation as an innovator. Its product innovations have included the governor-controlled food mixer, controlled heat immersible fry pan, cap-type hair dryer, fully automatic radiant controlled toaster, electric snow-thrower, twin blade electric mower, oscillating electric shaver and automatic vacuum-type coffeemaker. In 1946, the company name was changed to Sunbeam Corporation. Headquartered in Boca Raton, Florida, Sunbeam's operating groups are organized into 16 strategic business units, with headquarters in Aurora and Bridgeview, Illinois; Miami Lakes, Florida; Wichita, Kansas; Kearney, Nebraska; Lowell, Massachusetts; Lyon, France; Tokyo, Japan; and Sydney, Australia. Sunbeam's brands include Sunbeam®, Oster®, Mr. Coffee®, First Alert®, Health-o-meter®, Coleman®, Grillmaster®, Coleman PowerMate®, Campingaz® and Pelouze®. Their products are sold worldwide. On February 6, 2001, Sunbeam Corporation filed a voluntary petition with the United States Bankruptcy Court for the Southern District of New York under chapter 11 of title 11 of the Bankruptcy Code.