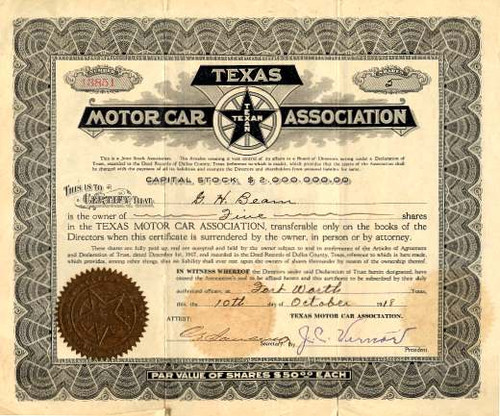 Beautifully engraved certificate from the Texas Motor Car Association issued in 1918. This historic document was printed by the Dorsey Company and has an ornate border around it with a vignette of a star with the word "Texan" printed vertically and horizontally. This item is hand signed by the Company's President ( J. C. Vernor ) and Secretary and is over 86 years old. Minor wear and corporate seal image on folds, otherwise EF. 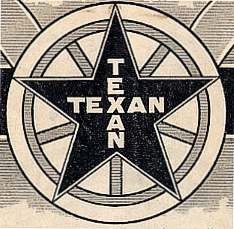 Certificate Vignette
In 1917 two brothers, James C. and Will H. Vernor, started the Texas Motor Car Association in Dallas with two hundred dollars in capital. They built an automobile factory south of Fort Worth on the bare prairie that would someday be the 3600 block of McCart. The company had big plans to produce a luxury car and an oilfield truck. The city of Fort Worth planned to extend a streetcar line south along the old Cleburne Road for the convenience of factory workers. But the company's life was brief. By 1922 the company had ceased production, hurt by a factory fire, the post-World War I flu epidemic, drought, and competition from cars such as the Ford Model T. Only about two thousand Texan cars and one thousand Texan trucks were built. The car sold for one thousand dollars, had a thirty-five-horsepower engine, thirty-three-inch tires, a wooden dashboard, and a rumble seat. Decades later the Texan auto factory was bought by Martin Sprocket and Gear company. The Texan automobile was built by the Texas Motor Car Association of Fort Worth was designed specifically for Texas roads and weather. The oversized tires, powerful four-cylinder engine, and extra-wide roof for shade gave it special features for the Texas market.