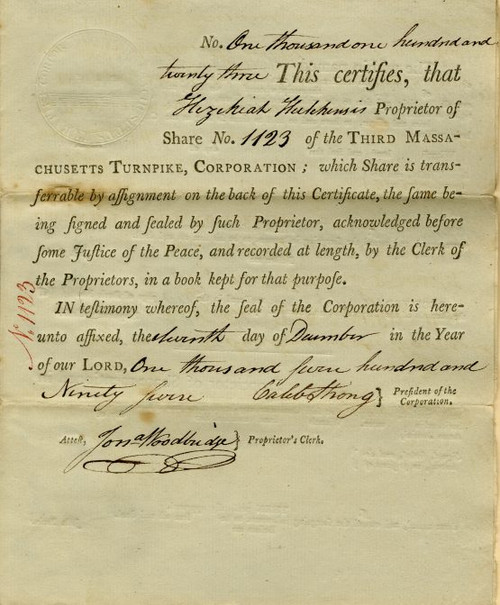 Colonial stock certificate from the Third Massachusetts Turnpike Corporation issued in 1795. This historic document was printed by the American Banknote Company and has an ornate border around it with a vignette of an eagle. This item has the signatures of the Company's President, Caleb Strong and Proprietor's Clerk, Jon A. Woodbridge. Issued to and signed by Hezekiah Hutchins. 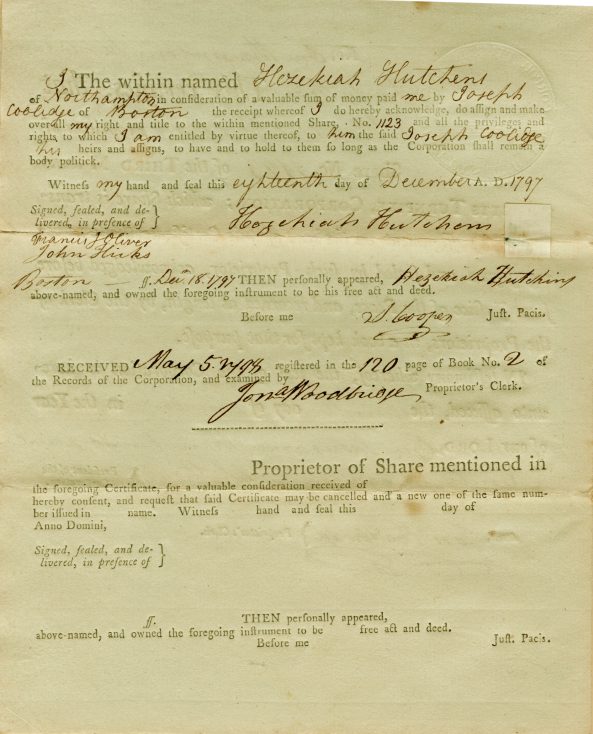 Caleb Strong (January 9, 1745 November 7, 1819) was an American lawyer and politician who served as the sixth and tenth Governor of Massachusetts between 1800 and 1807, and again from 1812 until 1816. He assisted in drafting the Massachusetts State Constitution in 1779 and served as a state senator and on the Massachusetts Governor's Council before being elected to the inaugural United States Senate. A leading member of the Massachusetts Federalist Party, his political success delayed the decline of the Federalists in Massachusetts. Caleb Strong graduated from Harvard College in 1764, studied law with the eminent Judge Joseph Hawley, and opened a practice in 1772. Strong was a successful lawyer and only four years later was appointed county attorney, a post he held until 1800. Strong began his political career in 1776 when he was elected a member of the State House of Representatives. The following year he married Sarah Hooker, the niece of John Worthington of Springfield, and sister of John Hooker, both of whom later became Proprietors of the Locks and Canals. n 1787, Strong was a delegate to the Constitutional Convention in Philadelphia and the following year was elected one of the first U.S. Senators from Massachusetts, serving until he resigned in 1796. While a Senator, Strong was an incorporator of both the Proprietors of Locks and Canals and the Third Massachusetts Turnpike which was chartered to build a road from Northampton to Pittsfield. Strong also took an interest in several societies and was president of the Hampshire Missionary Society and the Hampshire Bible Society, one of the founders of the Academy of Arts and Sciences, and a member of the Massachusetts Historical Society. A successful Northampton lawyer prior to 1774, Strong was politically active in the rebel cause during the American Revolutionary War. He played an influential role in the development of the United States Constitution at the 1787 Philadelphia Convention, and, as a US Senator, in the passage of its 11th Amendment. He also played a major role in the passage of the Judiciary Act of 1789, which established the federal court system. Chap. 0008 AN ACT IN ADDITION TO AN ACT INTITLED "AN ACT ESTABLISHING THE THIRD MASSACHUSETTS TURNPIKE CORPORATION." Be it enacted by the Senate and House of Representatives in General Court assembled and by the authority of the same, that if any person shall draw any log, tree, or stick of Timber on or over the road made by said Corporation, except in the months of January & February, unless such log, tree, or stick of Timber is loaded on a cart or sled, or one End thereof is raised on a sled, cart or other suitable carriage, he shall forfeit and pay to the said Corporation fifty Cents for every log, tree or stick of Timber so drawn, to be recovered in an Action of Debt. Approved June 17, 1797. History from Wikipedia and OldCompany.com (old stock certificate research service)