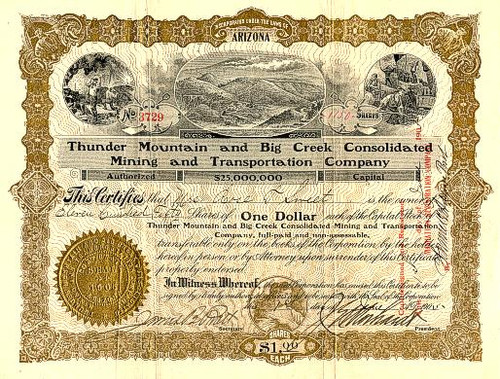 Beautifully engraved certificate from the Thunder Mountain and Big Creek Consolidated Mining issued in 1905. This historic document has an ornate border around it with a vignettes of 3 different mining scenes. This item is hand signed by the Company's President and Secretary and is over 104 years old.

Certificate Vignette
Placer gold was first discovered in this remote area of Idaho in 1894 by early area prospectors. By the early 1900s, the Thunder Mountain Gold Rush was underway, and the small town of Roosevelt was built near the gold mines and prospects. At the height of the boom, it is reported that 7,000 people received mail at the Roosevelt post office. By 1907, the easy placer gold had begun to play out, and the miners began to move on. In 1908, a large mudslide dammed the creek below Roosevelt, thus forming a lake that flooded the townsite. This event essentially spelled the end of the gold boom associated with the District.