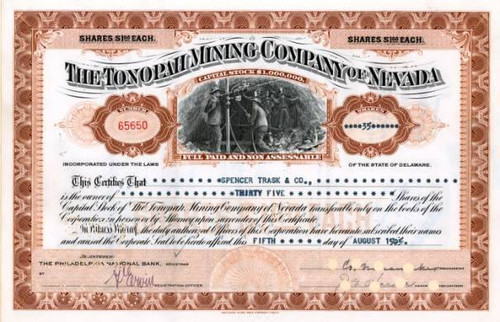 Beautifully engraved Certificate from the famous Tonopah Mining Company of Nevada issued in 1955. This historic document was printed by the Security Banknote Company and has an ornate border around it with a vignette of miners working inside of a mine. This item is hand signed by the company's president and is over 65 years old. Punch cancelled and is in EF+ Condition.

Massive doses of capital and labor again brought Nevada rapidly to its feet. During the 1900 census, Goldfield's (Esmeralda County) population was recorded at only 1,972 persons. Within five years, this isolated mining community had swelled to between 25,000 and 30,000 persons and was by far the largest city in Nevada. Nearly just as quickly, however, the Goldfield mining boom began its inevitable downward spiral, dropping the city's population to 9,369 persons recorded by 1910 and to only 2,410 person by the time of the 1920 census, 810 persons fewer than had been recorded in the 1880 population census for Esmeralda County. Thirty miles to the north of Goldfield, the town of Tonopah (in Nye County) also boomed from local gold discoveries, with its population exploding from only 1,140 persons in 1900 to 7,513 persons by 1910. In a burst of civic-mindedness, Wyatt Earp, having gained legendary notoriety for his Tombstone, Arizona, and OK Corral exploits, established a bar and tobacco store to share in the riches of the City of Tonopah, thus renouncing his somewhat checkered past. (Fortunately, the town fared better than Earp, who was arrested two years later in Los Angeles on fraud charges.) Nevada Historical Marker 101 Location: Central Region, Esmeralda County, Nevada. Located on U.S. Highway 95, thirteen miles north of Tonopah, Nevada.