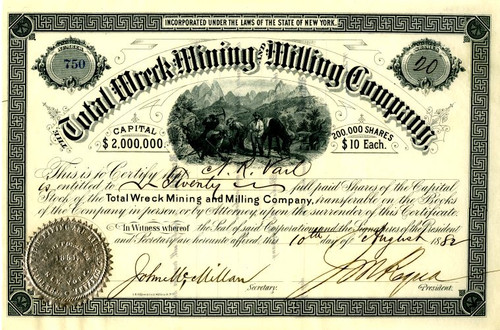 Beautifully engraved certificate from the Total Wreck Mining and Milling Company issued in 1882. This historic document has an ornate border around it with a vignette of vignette of exploring miners. This item has the signatures of the Company's President, J.M. Requa and Secretary, John McMillan. Issued to Nathan R. Vail. This rare certificate is in mint condition. Mine was located in Arizona and the company was incorporated in New York. 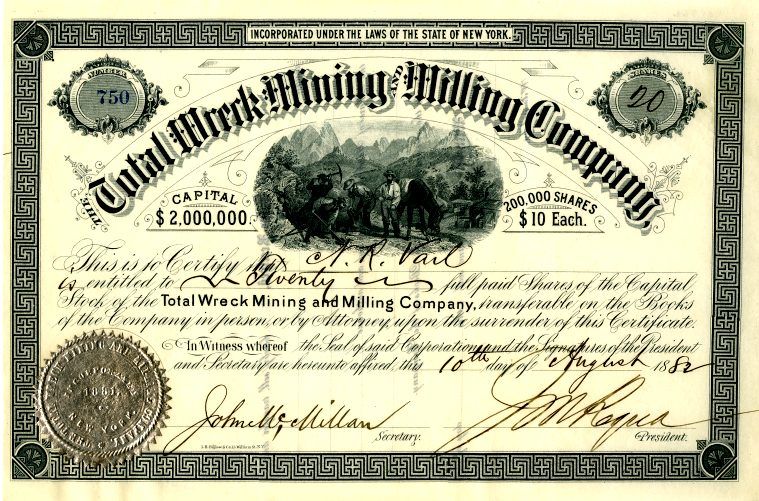 Certificate
Total Wreck is a ghost town in Pima County, Arizona. John L. Dillon, the owner of the claims, named the townsite Total Wreck because he thought that the mine was on a ledge that looked like "a Total Wreck" because it was below a quartzite ledge with large boulders of quartzite strewn all over. The mine and its operations spawned the town around it, which had a post office and 4 saloons. The mine's founders were Walter Vale, and J.T. Dillon, and was noted for its rich silver production in its heyday. Black borders and a central vignette of exploring miners. The stock measures 10" x 6.70". Nathan R. Vail (1825-1888), a noted rancher, cattleman, and businessman, was one of the owners of the Total Wreck mine. He was the uncle of Walter L. Vail (1852-1906), who became a major figure in the Arizona cattle industry and owner of the famous Empire Ranch, was a co-owner of the Total Wreck mine along with his uncle. Now a ghost town, Total Wreck was a mining town established in Pima County in 1879 by John Dillon, the discoverer of the mine. According to legend, Dillon named the mine Total Wreck because he thought the mineral formation on the claim looked like a "total wreck." The claim was located on the was located on the Walter Vail's Empire Ranch and the silver mine made the wealthy Vail family more wealthy, generating more than $500,000 in profits. By 1884 the mine was in decline and by 1890 Total Wreck was well on its way to becoming a ghost town.. This rare certificate is in mint condition. History from Wikipedia and OldCompany.com (old stock certificate research service)