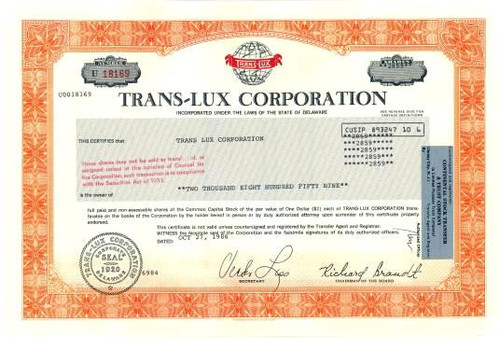 Beautifully engraved Certificate from the Trans - Lux Corporationissued in the 1980's. This historic document has an ornate border around it with a vignette of the company's logo. This item has the printed signatures of the company's officers and is over 13 years old. 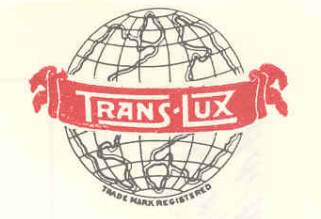 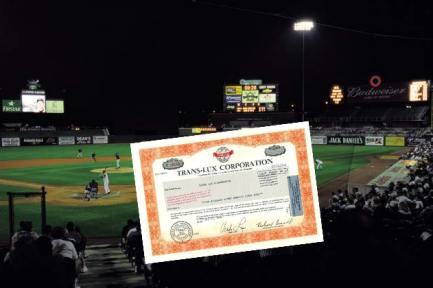 Trans-Lux, headquartered in Norwalk, CT, USA, was founded in 1920 based on the invention of rear-screen projection. In 1923 the first Trans-Lux "Movie Ticker" was installed at the New York Stock Exchange. The system featured a projector and lens specially designed for projecting a newly developed translucent ticker tape. On August 26, 1925 Trans-Lux went public and was listed on the New York Curb Exchange, which later became the American Stock Exchange. Trans-Lux stock is still traded on the American Stock Exchange under the symbol "TLX" (AMEX: TLX) and is the oldest listed company on the Exchange. In addition, Trans-Lux owns and operates a growing chain of motion picture theatres in the western United States (www.transluxmovies.com) and real estate in the U.S. and Canada for corporate and income-producing purposes. Trans-Lux has major U.S. sales and service centers in Norwalk, CT; New York; Atlanta; Chicago; and Torrance, CA in addition to satellite offices throughout the U.S. and Canada. Subsidiary companies are located in Iowa, Utah, Canada, and Australia. Trans-Lux's International Division maintains a distributor network throughout the world, including most major financial centers as well as many developing countries. CINCINNATI, Sept. 26, 2001 -- Major League Baseball's Cincinnati Reds will install Trans-Lux RainbowRibbon(TM) fascia displays as well as a Trans-Lux baseball scoreboard, pitcher's board and out-of-town game board in the new Great American Ballpark. The project is estimated at over $3 million. The new stadium is set to open for the 2003 season at a cost of $297 million with over 42,000 seats. The three hundred feet of new RainbowRibbon(TM) displays feature over 273,500 pixels in an 8.6 billion color LED matrix. Recently introduced, RainbowRibbon has garnered the interest of many professional sports teams due to its ability to optimize advertising space on arena and stadium tier fascias. The displays smoothly transition between video, advertising, animations, scoring/statistic layouts, and up to six lines of text around the interior of the facility. RainbowRibbon uses Trans-Lux' unique XFS scaling which allows precise control of video images and improves image quality at the lower resolutions typical of LED displays. The system also features a 3.5' x 33.5' SpectraLens(TM) pitch count board and a giant 24' x 164' SpectraLens scoreboard -- possibly the largest incandescent scoreboard ever constructed for a professional sports facility. The scoreboard will be located in the left outfield and is capable of displaying game scores, graphics, animations, player statistics, advertising and general information. As members of the National League, the Cincinnati Reds boast over 130 years of baseball history. Highlights in a long list of accomplishments for the Reds ball club include the first professional baseball game, the first night game, five World Series Championships, nine league championships and nine division Championships. Trans-Lux is proud to support the Reds with its own history of innovation. Trans-Lux continues to be a predominant supplier of LED/incandescent displays and scoring systems for major and minor league baseball. Over the last two years, Trans-Lux has supplied displays for the San Francisco Giants, as well as Cincinnati's farm team, the Louisville Riverbats. In addition, the company has installed systems for the Memphis Redbirds, Roundrock Express, Lexington Legends, Lakewood BlueClaws, Portland Beavers, and Columbus RedStixx. Trans-Lux is set to install additional boards for the Toledo Mudhens and Peoria Chiefs. In addition to professional baseball, Trans-Lux provides displays and equipment to other professional sports teams. Most recently, the company is installing displays for the NBA's Charlotte Hornets and Detroit Pistons. Trans-Lux is a leading manufacturer, distributor and servicer of real-time, programmable electronic information displays for use in both indoor and outdoor markets. These displays are used primarily in applications for the financial, banking, gaming, corporate, transportation, entertainment and sports industries. In addition to its display business, the Company owns and operates a chain of motion picture theatres in the western Mountain States.