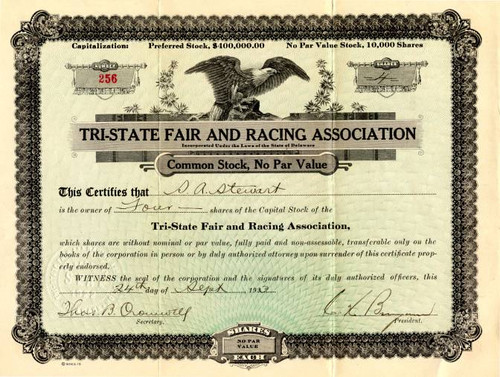 Beautiful certificate from the Tri-State Fair and Racing Association printed in 1923. This historic document was printed by the Goes Company and has an ornate border around it with a vignette of an eagle. This item has the original signatures of the Company's President, Charley Berryman and Secretary, Thomas B. Cromwell and is over 88 years old.

Certificate Vignette
In early 1922, J. D. Keene, owner of "Keenland Stud" planned to build the fifth Kentucky race course near Ashland. He bought four tracts of land one mile west of Chinnville, Kentucky. On August 28th, the Tri-state Fair and Racing Association was formed and bought Keene's property and additional three tracks of land totaling 350 acres. J. D. Keene was made General Manager and supervised the building and operation of the track. The Kentucky State Racing Commission licensed the races. Admission was $2.00 for men and $1.00 for women plus a 10% tax. The racetrack was named "Raceland". The track was easily reached by car and bus with only 40-cent bus fare from Ashland. Passenger trains delivered fans within 500 feet of the Grand Stand. The Raceland track was compared to no other in beauty and design and was known as the "Million Dollar Oval". Raceland was introduced to the public during the summer of 1924 with 21 days of racing from July 10th to August 2nd. The opening day featured the Ashland Handicap with an attendance of 15,000. The closing event was the Greenup Handicap, August 2nd. The featured event of the season was the Raceland Derby, July 19th. Because of the entry of "Black Gold", winner of the Kentucky, Louisville, Ohio State, and the Chicago Derbies a record crowd of 27,000 attended Raceland's first derby. Bets of $12,447 were placed on the favorite "Black Gold". The other entries were "Altawood", "Bob Tail", "Phidias", and "Post Dispatch". Due to an extremely fast break, "Bob Tail" won paying $15.90 for a $2.00 bet. "Altawood" finished second and "Black Gold" third. In the summer of 1925, a 27-day racing event was held between July 9th to August 8th. The second derby was held July 18th. In the summer of 1926, a 25-day racing event was held. The third derby was held July 9th. In the summer of 1927, a 21-day racing event was held. The fourth derby was held July 16th. In the summer of 1928, a 16-day racing event was held. The fifth derby was held July 14th. Raceland was not a financial success. On October 27th, 1928, the court ordered the fo reclosure of Raceland. On November 9th, 1928, Raceland was sold to the highest bidder, S&S Lyric Inc of New York, to pay the $200,000 mortgage. Attempts were made to reopen the track. Raceland Inc. was formed and leased the track for a fair July 1st to July 6th, 1929. During the 1930's, 4th of July celebrations were held around the Grand Stand. Finally on March 29th, 1937, the land was sold to J.R. Bonzo and his son, Ernest. Starting with the Grand Stand, some structures were torn down and scraped. Portions of the land were sold.