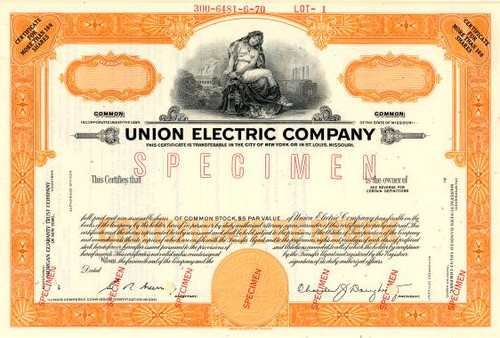 Beautiful engraved specimen certificate from the Union Electric Company dated in 1970. This historic document was printed by American Bank Note Company and has an ornate border around it with a vignette of an allegorical woman. This item has the signatures of the Company's President and Secretary and is over 36 years old. 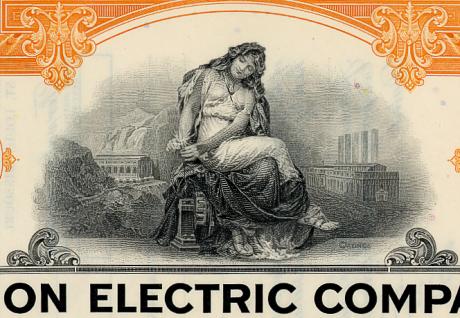 Certificate Vignette
Union Electric founded in 1902, operates as Ameren and serves 1.2 million power customers and 110,000 gas customers through nine power plants. The utility's service territory includes 65 Missouri counties and four Illinois counties; more than half of its customers reside in the St. Louis metropolitan area. AmerenUE also has interests in power plants (primarily thermal) with approximately 8,000 MW of generating capacity, and it engages in wholesale power transactions. In December 1997, Union Electric and CIPSCO Incorporated, parent of Central Illinois Public Service Company, merged, creating Ameren Corporation and its principal operating companies -- AmerenUE and AmerenCIPS. Ameren, its operating companies and its subsidiaries serve over 2.3 million electric and 900,000 natural gas customers in Missouri and Illinois. About Specimens Specimen Certificates are actual certificates that have never been issued. They were usually kept by the printers in their permanent archives as their only example of a particular certificate. Sometimes you will see a hand stamp on the certificate that says "Do not remove from file". Specimens were also used to show prospective clients different types of certificate designs that were available. Specimen certificates are usually much scarcer than issued certificates. In fact, many times they are the only way to get a certificate for a particular company because the issued certificates were redeemed and destroyed. In a few instances, Specimen certificates we made for a company but were never used because a different design was chosen by the company. These certificates are normally stamped "Specimen" or they have small holes spelling the word specimen. Most of the time they don't have a serial number, or they have a serial number of 00000. This is an exciting sector of the hobby that grown in popularity over the past several years.