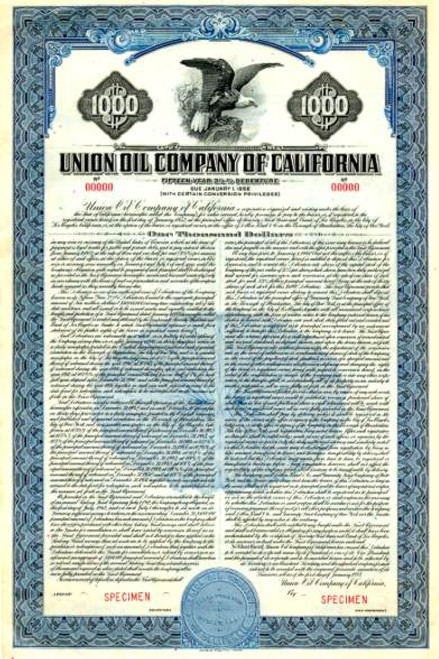 Beautifully engraved RARE SPECIMEN certificate from the Union Oil Company of California printed in 1937. This historic document was printed by the Jeffries Banknote Company and has an ornate border around it with a vignette of a bald eagle perched on a rock. This is the first time we have seen this bond. 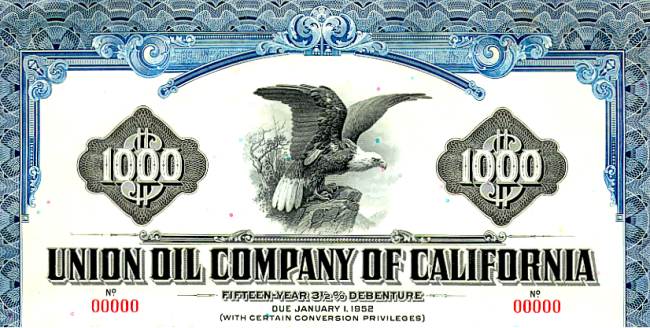 Certificate Vignette
To form Union Oil, co-founders Lyman Stewart, Thomas Bard, and Wallace Hardison merged their holdings. Although they could not then have foreseen the tremendous impact the automobile would soon have on oil demand, they were aware of oil's potential as an industrial and transportation fuel. Stewart and Hardison met in the Pennsylvania oil fields, which boomed after the country's first oil well was drilled near Titusville in 1859. The partners built up modest oil fortunes, then sold out and moved west in the 1880's to seek greater opportunities in California. In 1890, Stewart and Hardison combined their oil assets with those of Thomas Bard, a prominent businessman, to form the Union Oil Company of California. The company was incorporated on October 17, 1890, in the small town of Santa Paula, located about 100 miles northwest of Los Angeles In 1983, Union Oil Company of California was reorganized, becoming an operating subsidiary of a new holding company, Unocal Corporation. Two years later, Union began doing business as Unocal. Unocal is one of the world's leading independent natural gas and crude oil exploration and production companies. The company's oil and gas activities are in North America and Asia. About Specimen Certificates Specimen Certificates are actual certificates that have never been issued. They were usually kept by the printers in their permanent archives as their only example of a particular certificate. Sometimes you will see a hand stamp on the certificate that says "Do not remove from file". Specimens were also used to show prospective clients different types of certificate designs that were available. Specimen certificates are usually much scarcer than issued certificates. In fact, many times they are the only way to get a certificate for a particular company because the issued certificates were redeemed and destroyed. In a few instances, Specimen certificates we made for a company but were never used because a different design was chosen by the company. These certificates are normally stamped "Specimen" or they have small holes spelling the word specimen. Most of the time they don't have a serial number, or they have a serial number of 00000. This is an exciting sector of the hobby that grown in popularity and realized nice appreciation in value over the past several years.