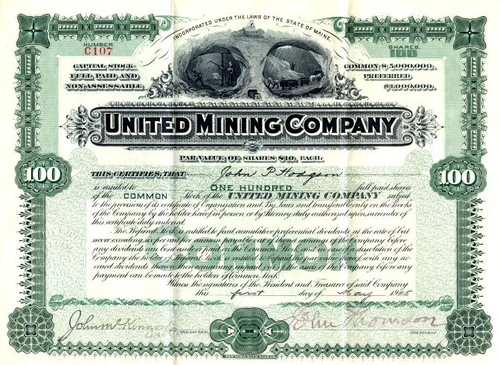 Beautiful certificate from the United Mining Company issued in 1905. This historic document was printed by the New York Banknote Company and has an ornate border around it with a vignette of men working in a mine. This item has been hand signed by the Company's President, John Thompson and Asst. Treasurer, John McKinnon and is over 106 years old. 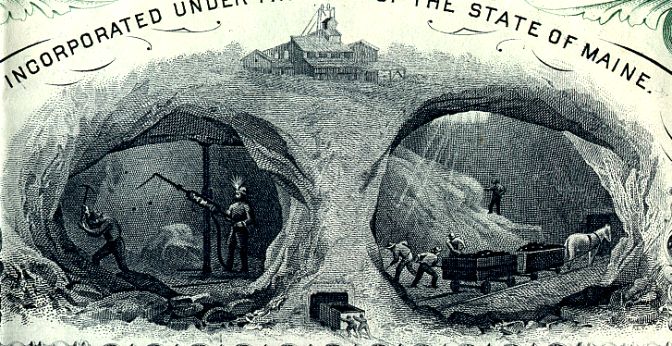 Certificate Vignette
Mines register: successor to the Mines handbook - 1908 UNITED MINING CO. UNITED STATES, CANADA & MEXICO. Office: 66 Broadway, New York, N. Y. John Thompson, president; Albert Freeman, vice-president; John B, Stanton, treasurer; John McKinnon, secretary; preceding officers and Josiah Quincy, directors; £. A. Tays, managing engineer. Organized Jan. 17, 1905, under laws of Maine, with capitalization $6,000,000, shares $10 par, in $1,000,000 cumulative 6% preferred stock and $5,000,000 common stock, as successor of United Mining & Development Company of America. Is a promotion and development company, planned to develop and finance mines along much the same lines as the Venture Corporation of London. The King Solomon mine, area 40 acres, in Calaveras County, California, is a gold property which has not proven satisfactory, and is idle. The Century mine, at Brownell, Pima County, Arizona, formerly held by the Producer Mining Co., Frank Brownell, superintendent, has a 100' shaft, showing a 2' vein carrying auriferous and argentiferous copper ore of medium grade. The lands at Leadville, Lake County, Colorado, were 320 acres, of which apparently 40 acreB have been leased to the John Thompson Mining Co. The Monitor mine, at Saltese, Missoula County, Montana, formerly held under bond, has been surrendered. Company is said to hold the Greene-Campbell mines, near Silver Star, Madison County, Montana, and the Buckeye mine, in Flathead County, Montana. Company is Baid to have mining interests in the Black Hills of South Dakota. The Navajo group, apparently 6 claims, held on royalty of 12^%, show ing mainly gold ores, is near Bland, Sandoval County, New Mexico. Company is said also to have lands in the CochitI district of New Mexico. The Nevada de los Miches mine, area 107 hectares, near Fuerte, Sinaloa. Mexico, has auriferous copper ores, but apparently property has been surrendered. The Aztec copper mines are 12 miles from Alamos, Sonora. Three groups, including the Maconi mines, at Cadereyta de Montes, Queretaro, Mexico, apparently are tied up by litigation over titles with O. y T. Braniff. The Oldham-Stirling gold mine is circa 20 miles from Halifax, Nova Scotia, and the Cariboo Consolidated copper mine is in the same neighborhood. History from StockResearch.pro (Professional Old Stock Certificate Research Service).