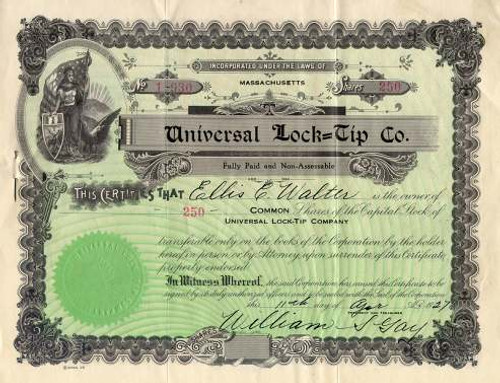 Beautifully engraved certificate from the Universal Lock-Tip Company issued no later than 1929. This historic document has an ornate border around it with a vignette of an allegorical woman-warrior with an American flag and shield and an eagle with its wings spread out. This item has the signatures of the Company's President and Treasurer, William S. Gay and is over 85 years old. 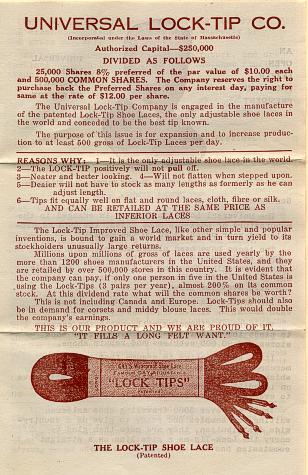 Company Brochure shown for Illustrative Purposes
ANNUAL REPORT OF THE FEDERAL TRADE COMMISSION FOR THE FISCAL YEAR ENDED JUNE 30, 1929 Complaint No. 1578.--In the matter of Universal Lock-Tip Co., Katherine Gay, doing business under the trade name and style, Universal Lock-Tip Co., and Emile W. S. Gay, otherwise known as William S. Gay, each individually, and as an officer of Universal Lock-Tip Co. Charge: Unfair methods of competition are charged in that respondent engaged in the sale of shoe laces advertises that the 25 shares preferred stock and 250 shares of common stock, representing shares In a patent string faster for use on the ends of shoe laces of which respondent corporation claims ownership, which they claim is given free of cost with every pair of shoes sold for $6.50 equipped with such laces, will give purchasers an opportunity to make $20,000 within the next few months without investment; cites instances showing a high percentage of sales; represents that the shares will be listed on the Boston and New York Stock Exchanges and gives as reference any bank In Boston or any mercantile agency, when In truth the patent Is owned by respondent W. S. Gay individually, and not by the respondent corporation; there Is no possibility of any such profits being made on the stock, or of Its being placed on the Boston or New York exchanges; the charge for the shoes covers the value of the shoes and the stock, together with a profit to respondent corporation; no such sales as cited have been made; and no bank or mercantile agency could reasonably recommend respondent corporation, all in alleged violation of section 5 of the Federal Trade Commission act. Status: Awaiting briefs. FEDERAL TRADE COMMISSION FOR THE FISCAL YEAR ENDED JUNE 30, 1930 "BLUE--SKY" OPERATIONS ORDERED STOPPED Universal Lock-Tip Co.--Respondent, Emile W. S. Gay, is the owner of a patent granted by the United States Patent Office for a string fastener adapted for use as a tip on the ends of shoe laces to keep the ends in a fixed point. Katherine Gay is his wife and is not engaged in business, and respondent corporation has never done business and has no assets of any substantial value. Emile W. S. Gay, otherwise known as William S. Gay, has been and is engaged in the business of the sale of shoes, shoe laces, and other products in connection with which he has circularized members of the public throughout the country offering to sell shoes, shoe laces, shirts, and stockings at stated prices and offering to give with said sales shares of the preferred and common capital stock of respondent corporation, in connection with which he has made numerous false and misleading representations concerning the property, resources, assets , production, or financial condition, etc., of the said corporation. The Department of Public Utilities of the Commonwealth of Massachusetts has received many letters or complaints with respect to the operations of respondents from practically the entire country during the last four or five years and has investigated the financial standing and method of the respondent corporation in disposing of its shares of stock and has been refused pertinent information ORDERS TO CEASE AND DESIST 79 respecting the subject of its inquiry by Emile W. S. Gay, other wise known as William S. Gay, respondent herein. After full consideration, the commission issued its order requiring respondent corporation and respondents Katherine Gay and Emile W. S. Gay to cease and desist from representing (1) that the respondent corporation is engaged in the business of selling shoes or shoe laces or other merchandise, or that the said corporation has any asset, as good will, by reason thereof, unless and until such is the fact; (2) that in connection with such business aforesaid the respondent corporation is the assignee of the patent rights of respondent William S. Gay for a patented string fastener or shoelace tip, unless and until such is the fact. The commission further ordered that respondents, William S. Gay and Katherine Gay, cease and desist from doing business on their separate individual accounts under the name Universal Lock-Tip Company or Universal Lock-Tip Co. while the respondent corporation is in existence under said name; (2) making statements in letters or circulars addressed to members of the public, or otherwise, concerning the respondents or any of them in connection with such business aforesaid, in which banks or mercantile agencies are given as references unless and until such bank or agency has given, in writing, to said respondents its consent to the use of such statement; (3) using the certificates of stock of respondent corporation or other corporation in connection with such business aforesaid and falsely representing that such shares represent an undivided or other interest in or under any patent rights not belonging to such corporation; (4) making and publishing statements or representations in letters to members of the public, or otherwise in connection with such business, that the shares of capital stock of respondent corporation will be or may be listed on the New York, Boston, or other stock exchanges unless and until such statements or representations are duly authorized by the officials thereof; or (5) representing in statements published in letters or otherwise that respondent corporation has, in connection with such business, orders on hand for the sale of shoes or other merchandise or that dividends have been earned by it on its shares of capital stock unless and until such statements or representations are true, and from making any other such false or misleading statement as a statement of fact or as to the happening of any future event concerning such of the respondent corporation or its said capital shares or of the said business of the respondents Gay, or either of them, unless and until the said statement of fact is true, or the happening of such future event is reasonably based upon facts set forth by respondents in connection therewith and such future event is clearly and unmistakably shown not to be an already accomplished fact.