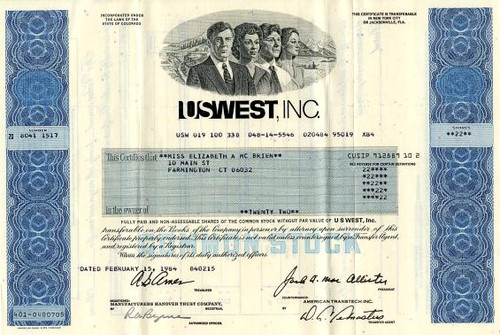 Beautiful uncancelled stock certificate from US West, Inc issued no later than 1986. This historic document was printed by American Banknote Company and has an ornate border around it with a vignette of business men and women with the Rocky Mountains in the background. This item has the printed signatures of the Company's President and Treasurer and is over 26 years old. 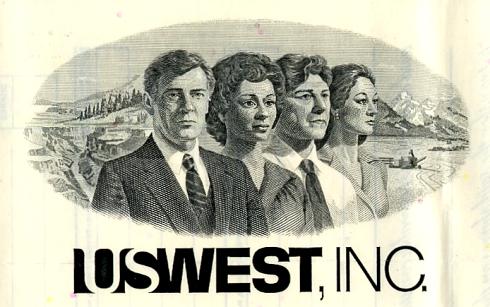 Certificate Vignette
In 2000, Qwest took a big step up in size and reach with the acquisition of U S WEST, the Denver-based 120-year old telecom giant that served 14 states throughout the West. The acquisition added the size and scale today's market demands of any top competitor, and a slate of advanced technologies -- such as leadership in Digital Subscriber Line (DSL) services, advanced frame relay, the country's largest Web-based yellow pages, PCS wireless and a network that features more than 99 percent digital switching. The combination of Qwest and U S WEST in 2000 created a $20 billion global giant with leadership in network technology, as well as applications and services. Its advanced fiber optic networks link directly to nearly 30 million customers. The company also has a rapidly growing presence in Europe, where its network connects 68 cities in 18 countries, and a foothold in Asia through a new Asia-Pacific office and interests in the US-Japan Cable project.