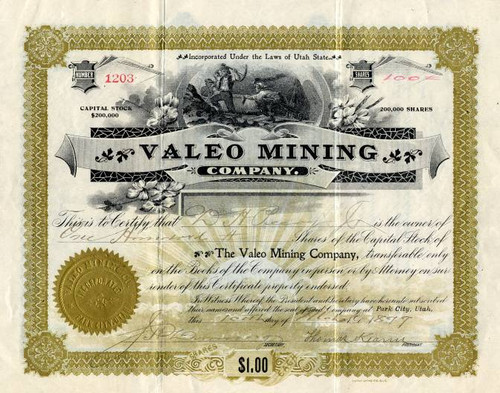 Beautiful certificate from the Valeo Mining Company issued in 1899. This historic document was printed by the Utah Litho. Company and has an ornate border around it with a vignette of an miner. This item has the original signatures of the Company's President, Thomas Kearns and Secretary, and is over 113 years old.

Certificate Vignette
Thomas Kearns United States Senator from Utah In office January 23, 1901 March 4, 1905 Born April 11, 1862 Woodstock, Ontario Died October 18, 1918 (aged 56) Salt Lake City, Utah Thomas Kearns (April 11, 1862 October 18, 1918) was a mining, banking, railroad and newspaper magnate. He was a United States Senator from Utah from 1901 to 1905. Born near Woodstock, Ontario, Canada, he moved with his parents to O'Neill in Holt County, Nebraska, where he attended the public schools until he was 17, worked on a farm, and engaged in the freighting business. He moved to Park City, Utah, in 1883, and worked in mining, prospected, and operated several mines. In 1889 and his partner David Keith discovered the rich ore that became the famous Silver King Coalition Mine in Park City. They would eventually own several mines throughout Utah, Nevada, Colorado and California. In Park City, Kearns, a Catholic, married Jennie Judge in 1890, and had three children. Kearns served in the City Council of Park City in 1895. He was a member of the Utah constitutional convention of 1895, where he worked for an eight-hour work day. He was elected as a Republican to the U.S. Senate to fill the vacancy in the term commencing March 4, 1899. At the time, U.S. Senators were still selected by state legislatures. Utah's state legislators had already indicated they would not support the incumbent, Republican Frank J. Cannon, for reelection. Alfred W. McCune, one of Salt Lake City's most prominent businessmen, sought and won the backing of the Church of Jesus Christ of Latter-day Saints (LDS Church) in his bid for the seat. But the legislature quickly deadlocked over the election. One-hundred and twenty-one ballots were cast, and no winner emerged. On February 18, a state representative accused McCune of trying to buy his vote. A seven-member legislative voted 7-to-2 to absolve McCune of the charge, and although balloting resumed on March 8 McCune still lacked enough votes to win office (he had only 25 votes). The legislature adjourned without having chosen a senator, Utah's U.S. Senate seat remained vacant until January 1901. The Republicans regained their majority in the state legislature in the election of 1900, and elected Thomas Kearns to fill the seat. The election was still hotly disputed. Kearns received only 8 votes on the first ballot, and balloting continued for four more days. On January 22, Kearns won the election by a vote of 37-to-25 (with a unanimous block of Democrats voting for McCune). He served from January 23, 1901, to March 4, 1905. Kearns was the first Utahn to establish a national and international political reputation, partly because of his personal and political friendship with President Theodore Roosevelt. Through Kearns' efforts as Utah's U.S. Senator, Fort Douglas became a regimental post. Supporters of Kearns formed the American Party. Though not publicly among the party's organizers, Kearns was influential in the party. The party was endorsed by the Salt Lake Tribune--which Kearns and his partner David Keith purchased in October 1901--and was successful in Utah politics from 1904 to 1911. After finishing his term in 1905, Kearns resumed his work in the mining, railroad, newspaper and banking business. Kearns and his partner David Keith purchased The Salt Lake Tribune newspaper in 1901 through a surrogate. He was one of the original incorporator's of the San Pedro, Los Angeles & Salt Lake Railroad and helped to ensure its success in completion from Salt Lake City to Southern California. He resided in Salt Lake City, Utah, until his death in 1918. He died of a stroke eight days after he was hit by a reckless driver on the corner of Main and South Temple. Interment was in Mount Calvary Cemetery. Kearns and his wife Jennie Judge Kearns, provided all the necessary funds to build the Kearns-Saint Ann's Orphanage, which is now a Catholic elementary school, Kearns-Saint Ann's School. They built a grand chateauesque marble, granite and sandstone palace residence on Brigham Street, now South Temple. Mrs. Kearns donated it to the state in 1937 to be used as the official Governor's residence; it is still being used as the Utah Governor's Mansion. History from Wikipedia and OldCompany.com (old stock certificate research service)