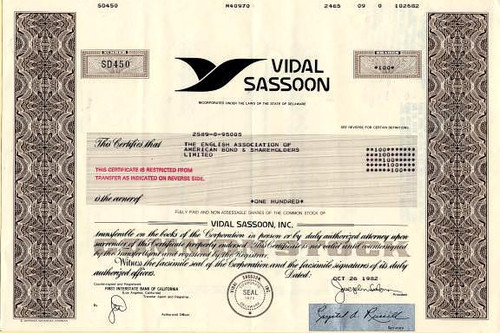 Beautiful certificate from the Vidal Sassoon issued in 1982. This historic document was printed by Jefferies Bank Note Company and has an ornate border around it with the company's logo. This item has the signatures of the Company's President and Secretary and is over 24 years old. This is the first time we have had a certificate from this company for sale.

Certificate Vignette
Vidal Sassoon (born January 17, 1928 in London) is a cosmetologist and one of the most influential hair stylists of the mid-1960s. Vidal Sassoon (left) together with Figaro Claus Niedermaier from Biberach/Riss (Germany)Born to humble Jewish parents in London, his father was from Salonika in northern Greece and his mother, whose family were originally from Kiev, was born in London. His works include the geometric, the wash-and-wear perm, and the "Nancy Kwan." They were all modern and low-maintenance. The hairstyles created by Sassoon relied on dark, straight, and shiny hair cut into geometric yet organic shapes. In 1963, Sassoon created a short, angular hairstyle cut on a horizontal plane that was recreation of the classic "bob cut" His geometric haircuts seemed to be severely cut, but were entirely lacquer-free, relying on the natural shine of the hair for effect. "Hair is nature's biggest compliment and the treatment of this compliment is in our hands. As in couture, the cut is the most important element... haircutting simply means design and this feeling for design must come from within." - Vidal Sassoon Vidal Sassoon is a father of modernist style. He has also been a key force in the commercial direction of hair styling, turning its craft in to a multi-million dollar industry. By the early 1980s, Vidal had sold his name to manufacturers of haircare products and the multinational Procter & Gamble was applying his name to shampoos and conditioners sold worldwide. Former salon colleagues had also bought Vidal's salons and acquired the right to use his name and extended the brand in salons in the United Kingdom and United States. However, in 2003, it was reported that Vidal was suing Procter & Gamble for destroying his brand by skimping on marketing in favor of the company's other hair product lines, notably Pantene. In 2004, it was reported that he was no longer associated with the brand that bears his name. Also in 2002, the chain of Vidal Sassoon salons was sold to Regis Corporation, thereby dissolving any connection between the brand, its culture and its founding father. Unknown to most is that Vidal Sassoon volunteered for and fought in the Israeli army when the State of Israel was declared. Because of this, many Muslims and Arabs refuse to purchase Vidal Sassoon products. Vidal Sasson was also a member of the British Anti-Fascist organisation, the 43 Group.