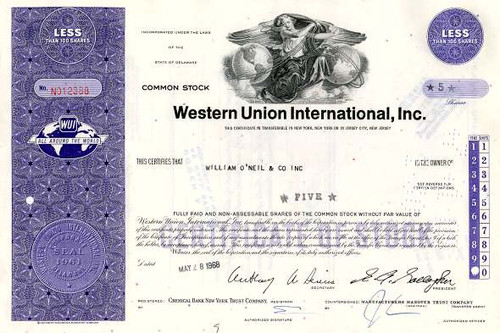 Beautifully engraved certificate from Western Union International, Inc. issued in 1968. This historic document was printed by the Security-Colombian Banknote Company and has a block border with a vignette of an allegorical woman holding two ropes that are being swung around a globe on each side of her. This item has the printed signatures of the Company's President and Secretary and is over 38 years old. 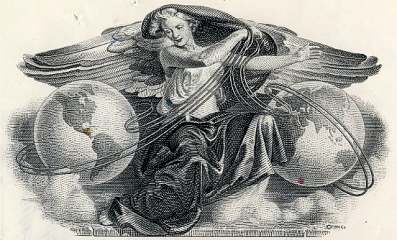 Certificate Vignette
The Western Union Telegraph Company began in 1851 to provide telegraphic communications services in the United States. Originally known as the New York and Mississippi Valley Printing Telegraph Company, Western Union built the nation's first transcontinental telegraph line in 1861. The company briefly entered the telephone field but, after losing a court battle with Bell Telephone in 1879, turned completely to telegraph communications. Western Union's telegraph business grew rapidly, and by 1943, after acquiring Postal Telegraph and some 500 other competitors, it was easily the largest company in its field. During the 1960s, faced with steeply declining telegraph revenues and rising costs, the company moved into a number of other related services, such as time-sharing computer systems, teleprinters, and satellite communications. The Western Union Corp., formed in the 1970s, eventually sold off its communications businesses and emerged in the early 1990s as the New Valley Corporation, a banking services and real estate company. Another division of the original company, Western Union Financial Services, became a subsidiary of First Data Corp. in 1995. The company now specializes in electronic money transfers, electronic mail and fax services, and telegrams (delivered via the World Wide Web); by the late 1990s there were 78,000 Western Union locations in 172 countries.