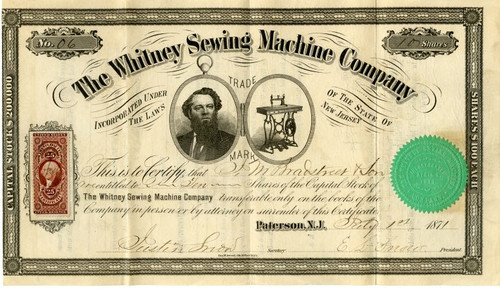 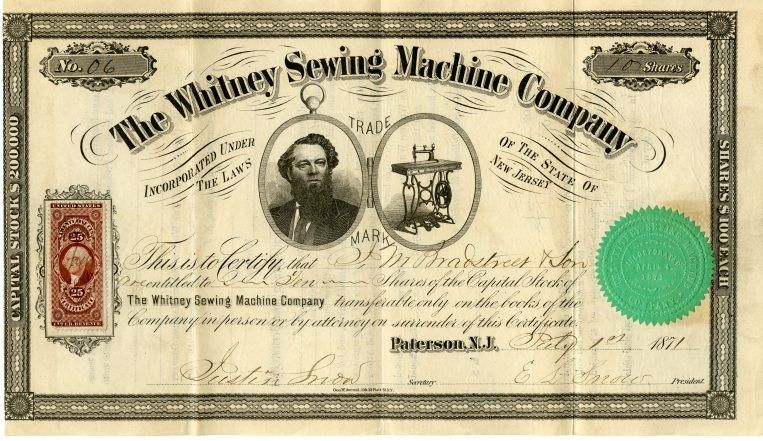 Certificate
Whitney Sewing-Machine Company.--An enterprise which at one time seemed to promise well as one of the leading and most important of Paterson's industries was the establishment in that city in 1871 of the manufacture of the Whitney Sewing-Machines. Mr. J. H. Whitney was the inventor of some valuable features of the sewing-machines then in use, and this gave him certain advantages in the business which few others could have. He had been associated for some years in the making of the machine known as the Wheeler and Wilson, on which he had certain patents. The company took about half of the first floor of the Dale Mill, on Railroad Avenue opposite the Erie Depot, and soon filled it with the most expensive machinery. They also established a japanning-shop in connection with the business, and in two years a foundry was also started especially to make the fine castings needed for the work. The company was incorporated by the Legislature in 1871, when E. L. Snow was chosen president, and Justin Snow secretary and treasurer. Mr. Whitney was superintendent. The capital was $200,000. The company was hampered by want of sufficient capital for one thing, and by the restrictions imposed upon it by the other sewing-machine companies, which controlled more important patents, and would not permit the Paterson company to use them unless on certain conditions, one of them being the obligation not to undersell rival makers. Thus, although even in Paterson, with all the disadvantages of a new enterprise, the machines could be made at a cost of from ten to fifteen dollars, they could not be sold for less than thirty-five dollars even to dealers. The want of capital it was sought to remedy by appealing to Paterson men of means, and they did subscribe quite liberally to help the concern along, but the panic of 1873, with other causes, led to the suspension of the company, and the shops were closed for some time. In November, 1873, the " Whitney Manufacturing Company" was formed, and bought out the old establishment. It was chartered by the Legislature in 1874. Albert A. Hopper was president of the new organization, and Adon E. Crosby was secretary and treasurer. The nominal capital was $200,000. The company kept up a spasmodic sort of existence for two years longer, when it finally succumbed, and the machinery and tools falling into other hands were removed from the city. The company was never a harmonious one in its organization, nor did it have enough actual capital to enable it to build up a paying business. History from the History of Bergen and Passaic Counties, New Jersey 1882, Wikipedia and OldCompany.com (old stock certificate research service)