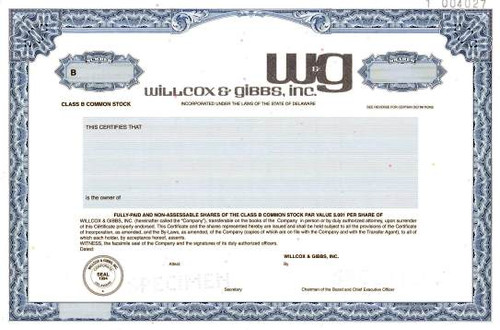 Beautifully engraved SPECIMEN certificate from the Willcox & Gibbs, Inc. This historic document has an ornate border around it with a vignette of the company logo.

Certificate Vignette
Willcox & Gibbs Sewing Machine Company started as a partnership of James Willcox and his son, Charles, of Philadelphia and James E.A. Gibbs The company was formed in 1857 to make the first practical single-thread chain-stitch machine for domestic use, as patented by Gibbs in 1856 and 1857. The actual manufacturing was undertaken by J.R. Sharp & Brown, who continued to make the components until 1948, when Willcox & Gibbs undertook all aspects of production. Their first office was opened in 1859 at 658 Broadway, New York. In 1867, London offices were opened at 135 Regent St; the English company of Willcox & Gibbs Sewing Machine Co. Ltd. was founded in 1908. Prices in England in 1867 ranged from 8 pounds to 15 pounds. All machine heads were built in the USA, but handwheels and wheel mountings were made in England by such founders as the Coalbrookdale Co. in Shropshire; the Coalbrookdale brackets carry a registration mark for 1869. After the Second World War, manufacture of industrial machines was begun in England.