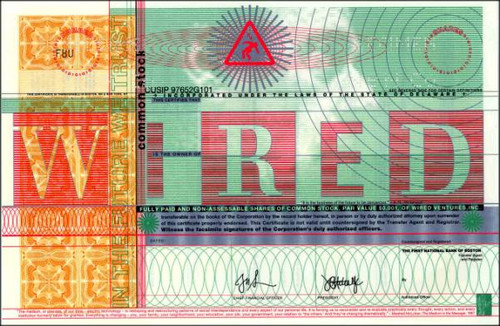 Beautifully engraved RARE Specimen Certificate from WIRED printed in 1996 when the company planned to go public. This historic document was printed by the Northern Banknote Company and has hi tech colorful ornate designs throughout the certificate. This is one of the most beautiful modern certificates we have seen and the first time we have offered it on our site. This item has the printed signatures of the company's officers and is over 24 years old. This certificate was never used in the public offering because the company was unable to get the IPO funded and pulled the offering in late in 1996. Due to the the company's continued losses. they were fored to sell out and did so in 1998 to Lycos. This is the first time we have seen this very scarce certificate which came directly from the archives of the bank note company.. Below is a description of the company in its S-1 filing with the SEC when it was trying to complete its IPO. Wired Ventures, Inc. (the "Company") is a new kind of global, diversified media company engaged in creating compelling, branded content with attitude for print, online, and television. Its current businesses include publishing Wired magazine and programming original content on the World Wide Web (the "Web") primarily through its HotWired network of online content sites (the "HotWired Network"). The Company believes that it has developed Wired and HotWired into strong brands that symbolize new media and the digital age. Wired magazine and the Company's online content sites have award-winning content and design that have attracted large and rapidly growing audiences with young, well-educated, and affluent demographics that the Company believes are highly sought after by advertisers. The Company also believes that with its creative, research, technological, sales, and management expertise, and its established brands, it has created a platform from which to launch additional brands across multiple media. In addition, the Company believes that its brands and media properties are well-positioned to capitalize on the expected growth in the use of the Internet and the Internet advertising market. Industry sources estimate that the number of Internet users will reach approximately 200 million by the end of 1999, up from approximately 56 million at the end of 1995, and that the market for advertising on the Internet will exceed $2 billion by 2000, up from $74 million in 1996. Wired magazine was launched in January 1993 to cover the Digital Revolution, a term popularized by the Company to describe the profound changes caused by the convergence of the computer, media, and communications industries. With Wired magazine's blend of leading-edge editorial and highly innovative design, the Company has created a unique magazine genre. Wired magazine is not a computer magazine; it is about the people, companies, and ideas of the Digital Revolution. Wired magazine's paid circulation has grown from 90,000 at the end of 1993 to an estimated 300,000 at the end of April 1996. The magazine's advertisers range from consumer goods companies such as General Motors Corporation and Calvin Klein Inc. to technology and telecommunications companies such as Microsoft Corporation and Motorola, Inc. The Company believes that Wired magazine is the first major technology-related publication that has been able to attract such a broad mix of advertisers. Wired magazine has won a number of prestigious awards, including a 1994 National Magazine Award for General Excellence and the 1996 National Magazine Award for Design Excellence, both given by the American Society of Magazine Editors. The Company's online programming is primarily distributed through the Web. Its flagship offering, the HotWired Network, was launched in October 1994 and features original content on topics such as politics, travel, arts, entertainment, health, careers, and lifestyle, as well as content based on Wired magazine. Users can access the HotWired Network's programs through the main HotWired Network site (http://www.hotwired.com) or through each program's own distinct Web address. The Company also produces the popular Suck.com online content site (http://www.suck.com), a source of sharp commentary on the Web and popular culture. During April 1996, the Company's Web sites received between 25,000 and 30,000 visitors per weekday, up from 12,000 to 19,000 visitors per weekday in September 1995. The Company's online advertisers range from consumer products companies such as Toyota Motor Corp. and VISA International to technology and telecommunications companies such as Silicon Graphics, Inc. and AT&T Corp. The HotWired Network has won a number of prestigious awards, including the Digital Hollywood 1995 and 1996 Best Site of the Year award and the National Information Infrastructure Award for Best Arts and Entertainment Site in 1995. In order to further leverage its online brand presence and its Web advertising sales capabilities, the Company recently launched HotBot (http://www.hotbot.com), a Web-wide search engine designed to search the complete text of all documents on the Web. The Company is extending its brands into new print, online, and television media properties, all of which are aimed at the core demographic groups reached by Wired magazine and the HotWired Network. The Company is currently developing a television program based on the HotWired Network's The Netizen political commentary program (http://www.netizen.com). The Company is in discussions with a cable television service regarding a potential strategic alliance for the production and distribution of the program. The Company, through its HardWired book brand, is also in the process of publishing several book titles. The first of these, Mind Grenades, is scheduled for release in September 1996 and will be featured as an alternate selection by the Book of the Month Club. In addition, the Company is exploring several new magazine, online, and television concepts that are editorially and creatively distinct from the Company's current products. The Company aims to create "smart media for smart people around the world" - high-quality information and entertainment products aimed at a well-educated, affluent, technologically savvy, and influential consumer group. Its mission is to build a new kind of global, diversified media company for the 21st century utilizing its ability to create compelling, branded content with attitude across multiple media, its research and technological capabilities, its strong connection to consumers and advertisers, and its commitment to journalistic and artistic excellence.