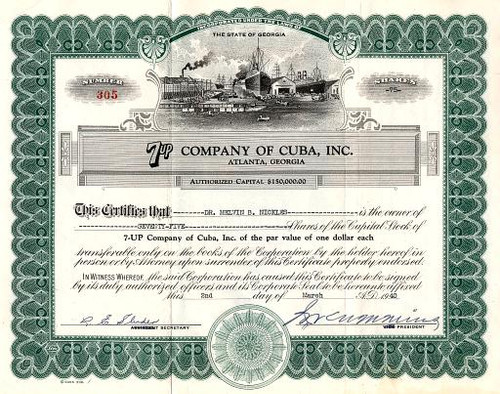 Beautiful Scarce certificate from the 7up Company of Cuba, Inc issued in 1940. This historic document was printed by Goes and has an ornate border around it with a vignette of ships in a harbor and the 7Up logo in the company's name. This item has the signatures of the Company's President and Secretary and is over 79 years old. This is the first time we have had this for sale and believe it to be quite scarce. 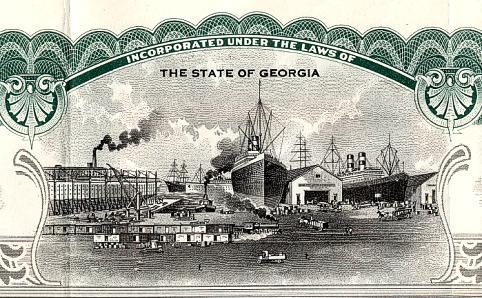 Certificate Vignette
The 7up Company of Cuba, Inc. was incorporated in 1938 with their headquarters in Atlanta, Georgia. The company was started to help market 7up in Cuba. History of the 7up Company: 7 Up was created by Charles Leiper Grigg who launched his St. Louis-based company The Howdy Corporation in 1920. Grigg came up with the formula for a lemon-lime soft drink in 1929. The product, originally named "Bib-Label Lithiated Lemon-Lime Soda", was launched two weeks before the Wall Street Crash of 1929. The product's name was soon changed to 7 Up. 7 Up, as its first name suggests, originally contained lithium citrate, a mood-stabilizing drug. It was one of a number of patent medicine products popular in the late-19th and early-20th centuries; they made claims similar to today's health foods. The Great Depression was just the beginning of the business challenges the product would face. In its early years, there were around 600 lemon-lime beverage brands being sold in the US.[2] 7 Up was able to survive and become the market leader in the category by being one of the first to be nationally distributed as well as being marketed as more healthy than other soft drinks The success of 7 Up led Grigg to rename his company to The Seven Up Company in 1936. Lithium citrate was removed from 7 Up's formula in 1950. After establishing the category as more than a niche, major competitors set their sights on it such as The Coca-Cola Company with its Sprite brand introduced in 1961. Sprite would not challenge 7 Up's position seriously until the 1980s when Coke forced its major bottlers then distributing 7 Up to drop the beverage in deference to Sprite. 7 Up challenged Coke's actions in court as anti-competitive, a challenge they eventually lost. Philip Morris acquired The Seven Up Company in June 1978. Philip Morris sold the brand's U.S. operations in 1986 to a private investment group, which merged with Dr. Pepper Company and established Dallas, Texas as the headquarters of the combined company.