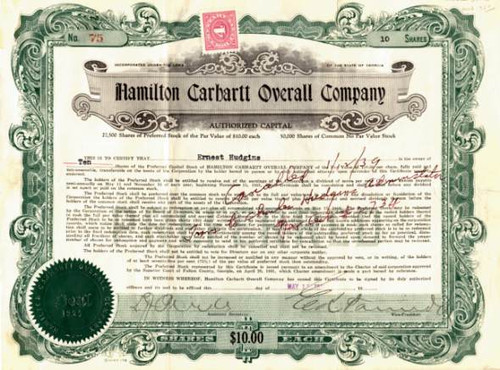 Beautifully printed certificate from the Hamilton Carhartt Overall Company issued in 1931. This historic document has an ornate border around it. This item is hand signed by the Company's officers and is over 72 years old. Minor ledger marks on left border otherwise VF. Founded in 1889, the clothing manufacturer offers a line of rugged overalls, flame-resistant work wear, outerwear, sweatshirts, sportswear, and work pants favored by farmers and blue-collar workers. Its clothes have shown up in such popular movies as The Perfect Storm and The Horse Whisperer. The founder of Carhartt, Hamilton Carhartt, quit school at twelve and started to help out in a fabric shop. His main duty was to sweep the entrance and the street outside the shop. Gradually he worked his way up to becoming a sales assistant and then he went on to be a travelling salesman in Michigan. Then he changed companies and again became a travelling salesman, now of men's clothes. Hamilton noticed that the most sought-after garment was the workman's overall, and thus the idea to start producing his own line, in order to settle this need and outside of his regular job, was born. So Carhartt went on to rent an office in an attic, he bought some sawing machines and got started. Unfortunately it proved hard to compete with the so-called 'sweat-shops', as people generally didn't care under which conditions their clothes were made. He found his niche with the railway workers, who were keen to have their work clothes made by hand. He carefully made the effort to find out what these workers really needed - something that nobody had did before him. The business grew and after a year he chose to quit the travelling and to concentrate only on his business. Today Carhartt is one of our most beloved labels. Through Carhartt Europe the clothes have been adapted to suit the European market. Here they sponsor sports like BMX, skate and snowboarding as well as different kinds of art activities. The American emphasis is still on the production of workwear, and in the US the sponsorship goes to genuine American traditions. History from company press information.