Academy of Music of Baltimore City - 1873 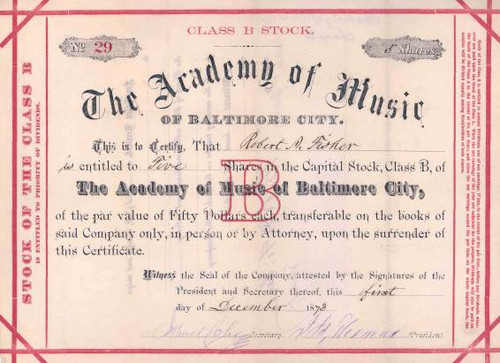 Academy of Music of Baltimore City - 1873

Beautifully engraved certificate from the Academy of Music of Baltimore City issued in 1873. This historic document has an ornate border around it. This item is hand signed by the Company's President ( John Hanson Thomas )and Secretary ( Israel Cohen ) and is over 147 years old. A meeting was held on Tuesday evening, March 22d, at the Mount Vernon Hotel, for the purpose of organizing an Academy of Music, and the building of an opera house or music hall. Dr. J. Hanson Thomas was called to the chair, and Israel Cohen, Esq., was appointed secretary. A charter was read and adopted, fixing the stock at $300,000; the shares $50 each, and giving to each holder of twenty shares ($1000) and his assigns the privilege of a free seat to all dramatic and operatic representations so long as the stock was held in one block. The following gentlemen were then appointed directors: Israel Cohen, W. T. Walters, Thomas H. Morris, S. T. Wallis, A. Schumacher, A. J. Albert, W. F. Frick, W. P. Smith, Werner Dressel, Dr. J. Hanson Thomas, J. Hall Pleasants, and John Curlett. For most of the latter half of the nineteenth century, two halls of the Academy of Music of Baltimore City on North Howard Street (opened in 1868) and the Conservatory of Music on South Eutaw Street (opened in 1874), accommodated performances of "serious" music in Baltimore. In 1891, civic leaders saw both a need and an opportunity to build a new hall commensurate with Baltimore's stature as one of the nation's largest cities. Construction on the Lyric Theater began in the summer of 1893. John Hanson Thomas (1813-1881) married Anne Campbell Gordon (1819-1886) on the 15th of November 1837. He was from an important Maryland family and she was the daughter of one of the richest merchants in Virginia, Basil Gordon. John Hanson Thomas was the great grandson of John Hanson, one of this country's founding fathers from Maryland. John Hanson was the presiding officer of Congress under the Articles of Confederation and the first person to be titled 'president' of the Congress in 1781, leading some to call him the first president of the United States. In this capacity, Hanson started the US mint, the foreign department -predecessor to the State Department and instituted the bank of North America our first central bank. He negotiated the peace treaty with Great Britain and declared the fourth Thursday of November as the first national holiday - Thanksgiving! John Hanson Thomas continued in his family's political footsteps. He served as mayor of Baltimore from 1850-1852 and also served in the Maryland legislature. In this capacity, he was a leader of the secessionists in 1861. He was arrested and imprisoned at Fort Warren. Hanson was the president of the Farmers and Merchants Bank of Baltimore and officers of the bank tried to secure his parole from prison. After obtaining his parole from Secretary of State William H. Seward, Hanson declined release three times! Anne Campbell Gordon was the daughter of Bazil Gordon, a merchant from Falmouth Virginia. Bazil Gordon emigrated from Scotland with his brother Samuel in 1786. He started a store which, due to the tobacco industry, grew into a large import/export business and he became one of the richest men in the United States - some claim he was the first millionaire on this continent. Anne's uncle Samuel Gordon purchased Kenmore, the Falmouth Virginia plantation built by Fielding and Betty Washington Lewis, George Washington's sister. Israel Cohen (1820-1875) Son of Benjamin I. Cohen; conducted extensive stock brokerage business; founder of the Second Baltimore Stock Board. Member Mechanical Fire Co.; Ringgold Infantry; a Director of the Pittsburg and Connellville Railway. One of the original perjectors of the Maryland Academy of Art and the Academy of Music of which he was Secretary and Treasurer. His father was BENJAMIN I. COHEN (1797-1845), One of the foremost bankers in Baltimore. He was a member of the banking firm of Jacob I. Cohen Jr., and Brothers, and was influential in forming the first Baltimore Stock Board in 1838. Benjamin I. Cohen was active in creating sentiment for the passage of the new Bill and urged members of the House of Delegates to introduce a bill to extend to persons of the Jewish Religion, the same civil privileges that are allowed to other religious sects. Cohen also played a prominent role in the social life of Baltimore and was reputed to have been a violinist, a botanist, and a horticulturist. Background from the Maryland Historical Society and Wikipedia.

Corporation of the City of Baltimore 1888