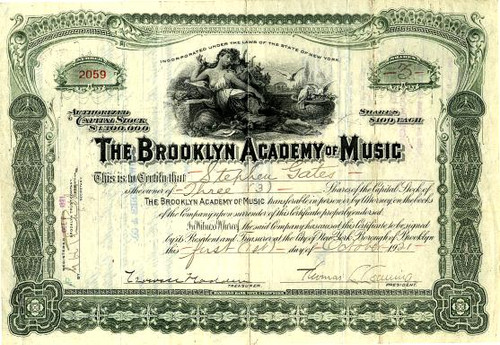 Beautiful certificate from the Brooklyn Academy of Music issued in 1921. This historic document was printed by Hamilton Banknote Company and has an ornate border around it with a vignette of an allegorical woman with doves next to a fountain. This item has the signatures of the Company's President and Treasurer and is over 89 years old. 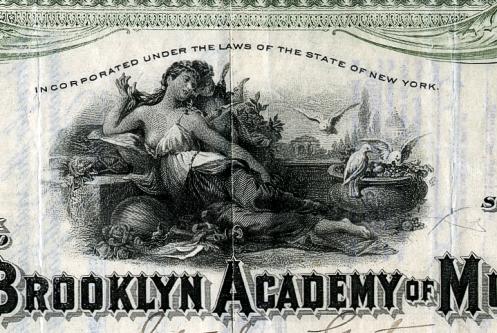 Certificate Vignette
Brooklyn Academy of Music (BAM) is a major performing arts venue in Brooklyn, a borough of New York City, known as a center for progressive and avant garde performance. Founded in 1861 the first BAM facility at 176-194 Montague Street in Brooklyn Heights was conceived as the home of the Philharmonic Society of Brooklyn. It housed a large theater seating 2,200, a smaller concert hall, dressing and chorus rooms, and a vast "baronial" kitchen. After the building burned to the ground on November 30, 1903, plans were made to relocate to a new facility in the then fashionable neighborhood of Fort Greene. The cornerstone was laid at 30 Lafayette Avenue in 1906 and a series of opening events were held in the fall of 1908 culminating with a grand gala evening featuring Geraldine Farrar and Enrico Caruso in a Metropolitan Opera production of Charles Gounod's Faust. The Met would continue to present seasons in Brooklyn through 1921. The new building is adjacent to downtown Brooklyn, near the Flatbush Avenue Station of the Long Island Rail Road and the Williamsburgh Savings Bank building, the tallest building in Brooklyn. After World War II, Brooklyn faced a decline like many other urban centers experiencing the doughnut phenomenon. BAM's audience and support base declined. Its current facilities feature: BAM Howard Gilman Opera House, with 2109 seats BAM Harvey Lichtenstein Theater, with 874 seats, formerly known as Majestic Theater, named in Lichtenstein's honor in 1999. BAM Rose Cinemas opened in 1997 allowing Brooklynites the chance to see more art films without having to go to Manhattan. In 1967 Harvey Lichtenstein was appointed executive director and during the 32 years that Lichtenstein was BAM's leader, BAM experienced a renaissance. BAM is now recognized internationally as a progressive cultural center well known for The Next Wave Festival (started in 1983). Artists who have presented their works there include Philip Glass, Peter Brook, Laurie Anderson, Lee Breuer, ETHEL, Nusrat Fateh Ali Khan, Steve Reich, Robert Wilson, Ingmar Bergman, The Whirling Dervishes and the Kirov Opera directed and conducted by Valery Gergiev among others. Starting in 2006, BAM has collaborated with the Sundance Institute on a special series of film screenings, performances, panel discussions, and special events bringing the institute's activities and its annual film festival's programming to New York City. The program highlights projects supported by the institute's programs in filmmaking, theatre, and film music. Today, BAM is under the leadership of President Karen Brooks Hopkins and Executive Producer Joseph V. Melillo.