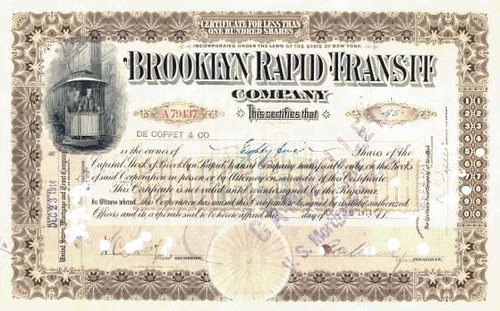 Beautifully engraved certificate from the Brooklyn Rapid Transit Company issued from up to 1922. This historic document was printed by the Franklin-Lee Banknote Company and has an ornate border around it with a vignette of a train and its conductor. This item is hand signed by the company's vice-president and assistant secretary and is over 91 years old. 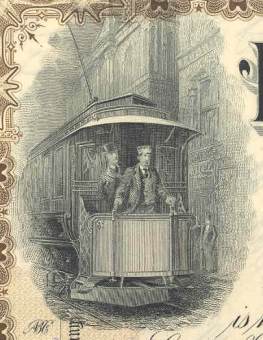 Certificate Vignette
The Brooklyn Rapid Transit Company was incorporated in 1896 and by 1900 as a result of mergers and aquisitions it had aquired control of all of these companies (and more). The BRT was a holding company -- it began to consolidate the elevated lines under a subsidiary called the Brooklyn Union Elevated Railroad Co. Another subsidiary, the Transit Development Company, was formed to own the shops and rolling stock. In 1912 The New York Consolidated Railroad was formed to operate the BRT's rapid transit lines. With the signing of the Dual Contracts and the BRT's entry as a subway operator, the New York Municipal Railway Corporation (NYM) was formed to enter into contract with the City. The NYM was then leased back to the New York Consolidated RR. The BRT was reorganized in 1923 as the Brooklyn Manhattan Transit Corporation (B.M.T.). Its new chairman, Gerhard Melvin Dahl, had considerable experience in both the public and private sectors. He was an attorney, who served as City Attorney and later was elected district attorney in Portage County, Wisconsin. In 1910 Dahl was appointed Street Railroad Commissioner in Cleveland, Ohio, and in 1912 went to work in the private sector as vice president of a utility company and later Chase Bank . Mr. Dahl became involved with the B.M.T., originally as a member of its reorganization committee and ultimately was elected chairman. William S. Menden (remember the Chief Engineer of the BRT) became president. Their goal was to re-vitalize the BMT, improve service, improve its public image, and enhance shareholder value.